U.S. Buys the Most Drones in the World, Spurs Billion-Dollar Industry 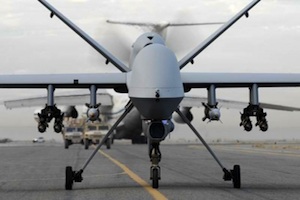 The U.S. has almost singlehandedly created an economy of its own creation.

The war in Iraq may be over, but the war in Afghanistan still wages on. And although the Obama Administration has laid out a plan for withdrawal, the current administration is under fire for the use of drones in conflict areas. While the use of unmanned aircraft systems deployed as weapons is controversial, it means big business for the companies that manufacture them.

Drones account for 31 percent of the U.S. military’s aircraft fleet, and the U.S. spends two-thirds of the $7.5 billion spent globally on drones.

For more on the U.S.’s spending on the controversial defense program, head to CNN Money.