US Airways Just Tweeted a Graphic, NSFW Photo on Twitter 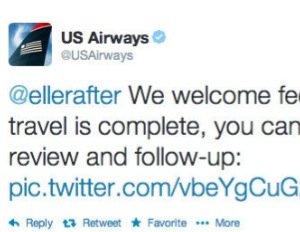 The graphic tweet was deleted after an hour of uptime, and is currently being investigated by the airline.

Think before you tweet. Or at least know what you’re tweeting.

That would’ve been good advice to the US Airway employee managing the airline’s Twitter account with over 419 thousand followers.

In an exchange with Twitter user Elle over a delay at the Charlotte Douglas International Airport, US Airways, as most companies on Twitter do, responded to Elle’s complaint.

The two went back and forth until something very strange happened.

The airline’s Twitter account tweeted this message: “We welcome feedback, Elle. If your travel is complete, you can detail it here for review and follow-up.â€

What followed was a pornographic image of a woman with a model airplane. The tweet was removed after about an hour, but spread like wildfire online.

@USAirways Unhappy that 1787 sat for an hour on tarmac in CLT because overweight, resulting in over hour late arrival in PDX…

@ellerafter We truly dislike delays too and are very sorry your flight was affected.

@USAirways yeah, you seem so very sorry. So sorry, in fact, that you couldn’t be bothered to address my other tweets.

After the tweet was deleted, US Airways followed up with an apology, and said they were investigating the inappropriate image.

We apologize for an inappropriate image recently shared as a link in one of our responses. We’ve removed the tweet and are investigating.

Of course, it wouldn’t be the first big screw-up by a corporation. Home Depot’s social media agency was fired after tweeting this photo. How to Qualify for the FHA Back to Work Program