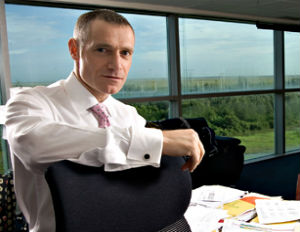 It’s only been about a year since president and chief of branding Michael Yormark joined Jay Z’s sports management company, Roc Nation Sports, but he has already melted multiple deals for celebrity athletes and top brands. He credits the two-year old agency’s success to its unique marketing strategy.

“We have a more strategic approach towards securing partners and communicating with C-Level executives,â€ Yormark explained in a telephone interview.Â  The former president and chief executive officer of the National Hockey League’s Florida Panthers says implementing this was a priority when he first got to New York.

Yormark says the key is to get in front of the C-Level executives and tell their clients unique story. This has been working charmingly according to the deals that Roc Nation has announced over the last year. Roc Nation is responsible for endorsement deals garnered by NBA Oakland Thunder’s superstar Kevin Durant, WNBA’s Skylar Diggins, and MLB’s Seattle Mariner Robinson Cano to name a few who call Roc Nation Sports their agency of record.

On February 25, Roc Nation Sports announced that Seattle-based Sparkling ICE was adding Cano to the Sparkling ICE family as a regional ambassador in the Pacific Northwest area.

“I’m excited to announce my partnership with Sparkling ICE because I love the product, but also because they care about the Seattle community and working with youth through their relationship with the Boys and Girls Club and their support of my RC22 Foundation,â€ said Cano in a statement.

According to SportspressNW.com, Yormark announced Cano’s deal with Sparkling ICE at the Seattle Chamber of Commerce’s quarterly panel session. In addition to cementing the Cano deal in Seattle, Yormark told BESportsBiz that he was planning to also discuss Sparking ICE’s partnership with Roc Nation Sport’s for the 2016 All-Star Weekend.

Prior to signing Cano as an endorser, Sparkling ICE launched their partnership with Kevin Durant during the 2015 All-Star Weekend in New York City.

“We had the first annual Roc City Classic which was terrific,â€ said Yormark referring to the outdoor concert headlined by Kanye West and Kevin Durant during this year’s All-Star Weekend. The concert gathered an estimated 10,000 people in 34 degrees, according to Rolling Stone. Â Thanks to the location and participation of Durant, “It was natural fit for Sparkling ICE to participate in that event. As you walked the site, they had a dominant presence,â€ said Yormark.

Sparking ICE was one of eleven partners who sponsored Roc City Classic and Yormark says Roc Nation Sports is looking to do the event annually at every All-Star Weekend around the country.

“The feedback from everybody was terrific. Now we plan to take this to every All-Star market moving forward,â€ said Yormark. And he is planning to take his sponsors with him.

In addition to Sparkling ICE, which has made a few splashes with Roc Nation Sports in the first quarter, Yormark said the company has strong partners at insurance and mobile companies as well, such as HTC and American Family Insurance.

“We are very pleased with the relationships we have made over the last twelve months,â€ says Yormark.

“What makes us a great company is our diversity,â€ says Yormark naming tours, the record label and the agencies philanthropic events. “We have such a wide variety of assets here that we are able to talk about brands everyday. Our portfolio is incredibly diverse.Â  We absolutely have something for everyone,â€ says Yormark.