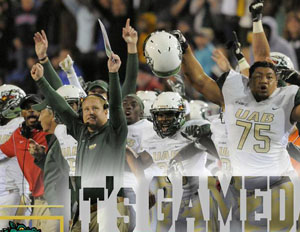 â€‹Oâ€‹n Tuesday, Dec. 2, the University of Alabama-Birmingham announced that it was discontinuing its football program. Thâ€‹atâ€‹ decision makes the institution “the first in college sports’ tier to do so in nearly 20 years,â€ reported the New York Times. Terminating the program was due to financial reasons.

“As we look at the evolving landscape of NCAA football, we see expenses only continuing to increase,â€ according to a news release on Dec. 2 from the university’s president, Dr. Ray L. Watts. “When considering a model that best protects the financial future and prominence of the Athletic Department, football is simply not sustainable.â€

“You’re telling me it’s because the numbers didn’t look right?” UAB senior tight-end Tristan Henderson said to the president. “And you’ll go home and sleep in a comfortable big-ass house. But it’s OK.â€

Iâ€‹n a releaseâ€‹ Uâ€‹AB sâ€‹tated,â€‹ that the school subsidizes $20 million of the athletic department’s operating budget of roughly $30 million annually and added that both those numbers rank fifth in Conference USA. â€‹Aâ€‹ccording to the release, â€‹tâ€‹hat equates to â€‹a $100 millionâ€‹ subsidy from UAB to the athletic departmentâ€‹ â€‹over the next five years, The â€‹University stated that the difference over the next five years would be an â€‹additional â€‹$49 million with football, â€‹according to ESPN.com.

University Alabama-Birmingham students protested outside the president’s office. A video of the meeting has been shared on Twitter, where some are supporting the players and coaches with a UAB football hash tag. “I wish nothing, but the best for the players and coaches. #StayStrong,â€ read oneâ€‹ â€‹tweet. “Every kid is not able to get a scholarship to Alabama or Auburn, but still wanna play on the D1 level and he just took that away #UABFootball,â€another tâ€‹weetedâ€‹.â€‹
â€‹
The scholarships for players and coach contracts will be honored. The final season will be
â€‹ the 2014-2015 academic year.