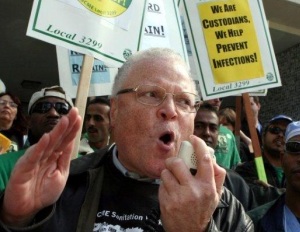 Labor unions have been part of the fabric of the US economy since they first began forming in the 1800s. On the political front, powerful unions and their leaders continue to impact legislation at local, state and national levels. Lee Saunders, Secretary-Treasurer of the American Federation of State, County and Municipal Employees (AFSCME) recently announced his intention to become the first African American president of the 1.6 million member labor union.

When New York’s District Council 37 was affected by the September 11 attacks, Saunders helped orchestrate the relocation of the DC37 staff and ensuring that the union stayed operational. Last year, he worked with AFSCME leaders in Wisconsin to force recall elections when legislators sought to inhibit the union’s ability to collective bargaining. BLACK ENTERPRISE spoke with Saunders recently about politics, his bid to lead the union, politics and the state of the American worker. Here’s what he had to say:

BLACK ENTERPRISE: Why are you running for presidency of AFSCME?

Lee Saunders: I think that we need a very, very strong labor movement in this country and I have been working with the union for 34 years and have the experience and know how and the ability to what to make an organization of 1.6 million members. I’m an advocate for public services and for working families across this country. I have participated in major negations and organized campaign, political campaigns all across this county and I think that based upon my experience I’m ready to lead from day one and build upon a very, very strong foundation that we have knowledge to build upon that and to represent our members the best way possible and the represent working families.

What is your platform? What are you looking to change or further within the organization?

Saunders: We are going to be organizing, and mobilizing our numbers. We are under many types of attacks across this country and state after state. You have some of the rightwing Governors and legislators who are trying steal our freedom away from us, take collective bargaining rights away from us. I think this is really an opportunity to develop a mainstream movement that consists not only of millions of both the public and private sector, but also develop relationships with our coalition partners and whether they be civil rights organizations or faith based community, students or retirees. Because the average working American, 99% of Americans are under attack like never before.Â  Those who are trying to play by the rules every single day yet you have the corporate greed that is still there, the top 1% trying to get more powerful. They are trying to get more powerful at the hands of taking power away from us and I don’t think none of can stand for that.

You mentioned an attack on unions. Over the past few years, the unions have been in the spotlight. Whenever an airline is in trouble, the companies talk about the labor costs and unions. When the American automakers ran into trouble, again, the unions were cited.

Saunders: Certain people would like to blame us rather than look in the mirror. That is one of the things that we are up against. We are not the scapegoat. I think that the labor movement in this country had played a valuable roll in creating a strong middle class and that middle class is under attack right now. The labor movement has been beneficial in supporting decent wages and decent benefits for its members, which has an impact on folks who are not even in unions, but those rights are under attack like never before, and I think people get it. I think people understand that this country is not moving in the right direct based on the greed that exists on Wall Street. Union and nonunion folks are saying we have to stand up and make our voices heard. We cannot let those freedoms be taken away from us. I believe that the people understand that the labor unions in this country and our members sacrifice, but we cannot be the bad guys all of the time. We sacrifice. We work with our employers, but when we are under attack, we are going to fight back.

It is also a presidential election year, what would you like the candidates to address with regard to the unions?

Saunders: We are supporting the President. I am on the National Executive Board based upon polling of our membership has made a decision has endorsed President Obama. I believe he has a strong record for working families in this country, whether it’s the passage of health care, the passage of the stimulus package, rebuilding the auto industry in this country along with supporting the unions that support the auto industries so I think he has a very, very strong record. I think we have to continue to work with him to continue to rebuild our economy and to provide jobs, jobs is the number one issue in this country. We have to create good paying strong jobs in this country and we can work with President Obama to do that. If you listen to the other side, the folks that are running on the Republican side, Romney, Gingrich, or any of those folks, they are bashing the unions. They don’t have plans to create jobs. Their number one goal is to beat Obama and they will say that publicly. If you look past that, they don’t have a plan for rebuilding America, and creating jobs. I think that the choice is very, very clear.

One of the issues, speaking of work force and labor has been outsourcing? You can make a compelling argument of as it costs us $1.15 to make it in the US or $0.25 to make is overseas, what can be done about that in terms of keeping jobs in this country from a price standpoint when there is definitely a competitive advantage to outsourcing?

Saunders: My parents always taught us that if we played by the rules and we did the right things that my brother and I would have a better life than they did. That is in jeopardy right now. The middle-class is in jeopardy right now based the fact that there seems to be a rush to the bottom in this country. I would like to flip the idea and say that we should not be talking about reducing pensions and reducing other benefits and reducing pay, we should be thinking about ways that in which, we could in rich the middle-class, improve upon their pay, improve upon benefits while we can still compete. This is a new world; it is a new global world, but we can compete with other countries but it can’t be a rush to the bottom and we have to have fair trade rules and we have to play hardball sometimes. I think that this country is built upon the middle-class being strong.

Hooray for Nollywood: Behind the Scenes of the Nigerian Film Industry

Green-Eyed Diva: 5 Steps to Conquer the Hater in You