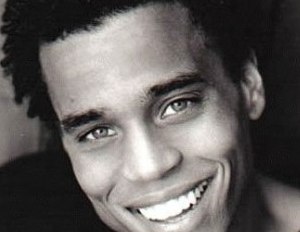 One glance and it’s understood: Actor Michael Ealy doesn’t have to say much to get the attention of women.Â The supernaturally handsome 38-year-old star of film Takers and CBS’s The Good Wife–who’s been romantically linked to Halle Berry, Ciara and Eve–knows he’s got the ladies’ votes. In fact, he’s spent so much time discussing his love life in the media that now he’s just plain tired of it. So much so that if you ask him who he’s dating (like this reporter did) he’ll answer, “Next question.”

Still, Ealy–whose breakout role was in Ice Cube‘s 2002 urban comedy Barbershop–knows that compliments about your good looks aren’t necessarily going to keep you working in Hollywood. (Even though appearing as one ofÂ People magazine’s “Sexiest Men Alive” in the same year couldn’t have hurt.) What will keep you working? Diversity of roles–one after the other if you’re lucky.

On March 9th, Ealy throws the men a bone in his upcoming film, Think Like a Man, based on the ubiquitous, New York Times best-selling book by Steve Harvey. In the film, he shows how even a cash-strapped cook (his character in the comedy) can pull a sista as fly as Taraji P. Henson, if he treats her right.

“Yes, the film is hilarious, but I think people are also going to be surprised by how romantic it is,” says Ealy of the laughfest, which co-stars comedian Kevin Hart, Chris Brown, Gabrielle Union and Meagan Good. “I think we do a pretty good job at exploring just how awkward–but rewarding–love can be. It’s something Taraji and I talked about nonstop while we were filming.”

Months before the busy actor turns his game on full swag, he crosses over into the dark side for the latest installment of the popular vampire-versus-Lycan series Underworld: Awakening, in theaters today (January 20th). “This is the first film out of the franchise where you get to see the humans running things,” he reveals of the series’ fourth release. “I represent the human element as a detective.”

You can also see the Silver Spring, Maryland, native in the new buddy-cop TV series Common Law, airing this summer on USA Networks. “It’s about two detectives who cannot get along, unless they’re solving a crime,” explains Ealy by phone from the series’ New Orleans set. “It gets so bad that their captain sends them to couple’s counseling. Now that’s pretty bad,” he laughs.

But Ealy’s got another project–a raw and emotional film inspired by true events called Unconditional–that he says definitely won’t be. “That one’s coming out this fall,” he says of the independent flick, in which he plays a character that seeks to redeem the lives of a group underprivileged kids living in a rough neighborhood. Given his diverse palette of roles on the horizon, it should be a little easier for fans to look beyond Ealy’s physical talents and focus more on his acting chops. “As you can see,” he laughs, “I have been a very busy man.”

See a the trailer for Think Like a Man below.

Career Tip of the Day: Google Yourself