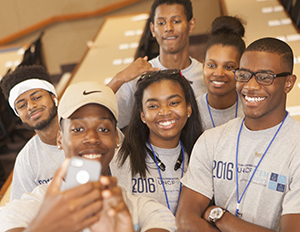 These UNCF STEM Scholars have a lot to smile about. (Image: Johnathon Henninger for UNCF)

The 100 top-performing African American high school seniors selected from across the nation will each receive a total award package of up to $25,000 that includes scholarships and a stipend for STEM internships over five years. In addition, the program will provide wraparound support critical to students’ academic success. The award will enable the students to pursue a bachelor’s degree in science, technology, engineering, and mathematics fields at the college or university of their choosing, while learning about innovation and startup tech entrepreneurship.

UNCF and Fund II Foundation President Robert F. Smith have been focused on diversity and inclusion efforts respectively, and, in particular, in the software industry. With African Americans making up less than 5% of the science and engineering workforce and less than 1% of all tech startups, Fund II Foundation and UNCF joined together to address this challenge. The Fund II Foundation UNCF STEM Scholars Program will create a robust pipeline of African American students that are well prepared to pursue careers in the tech industry and to become the next generation of innovators and entrepreneurs.

“We are thrilled by the selection of the first 100 Fund II Foundation UNCF STEM Scholars,â€ said Linda Wilson, Fund II Foundation executive director, in a statement. “These young scholars offer so much hope and excitement for the future, as technology is transforming the economy at lightning speed.â€

This year’s cohort represents 29 states; Georgia, Maryland, and Texas have the highest number of scholars per state with 14, 10, and eight, respectively. Florida, North Carolina, and Virginia have seven scholars each.

The inaugural class of STEM Scholars comprises 50 men and 50 women whose collective grade point average is 3.83. Forty-five percent of the scholars plan to pursue a degree in engineering; 44%, a degree in the sciences; 8%, in technology; and 3%, in mathematics.

The $48 million grant by Fund II Foundation marks the largest donation in UNCF’s 72-year history by an African American-led foundation.

6 Expert Tips On Working While Vacationing