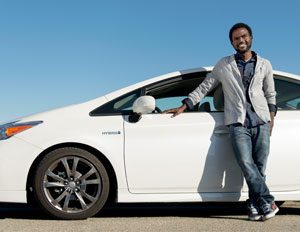 Uber is the go-to car service for city livers who want to avoid the hassle of hailing down a taxi, or partiers who want to get home responsibly after an eventful night. This New Year’s Eve the start up is expected to chauffer 2 million riders worldwide, according to Money.CNN.com. Since last New Year’s Eve, Uber has quadrupled its presence, operating in more than 260 cities throughout the world.

During high demand times, like New Year’s Eve, riders should beware, though, as the company charges passengers disproportionately large sums of money. Twitter user @Uber_Surge tweets followers’ totals of overpriced Uber rides during surge times. One customer was charged over $500. Money.CNN.com reports that last NYE Uber uploaded a blog post to detail its surge pricing and provide timing guidelines. Usually, passengers discover their total at the end of the ride, but during surge times, drivers are supposed to confirm the cost with passengers so that there is no surprise at the end. ABC News reports that 12:30 a.m.Â to 2:30 a.m. will be the busiest times and probably the most expensive to request a car.

To avoid the surge, many outlets are recommending Flywheel, an app that requests taxis in San Francisco, Sacramento, Seattle and San Diego. Flywheel offers flat rate $10 rides from 8 p.m. Wednesday until 3 a.m. Thursday. SurgeProtector is another app and it identifies the nearest “no-surge zone,” which may be only a few blocks away, for Uber users.

Five Ways to Get Your Health Goals Back on Track

Busy Pro on the Go? Save Time with Dinner Kits Delivered To Your Door