Two Young and Powerful Lawyers Are Successfully Building Their Firm 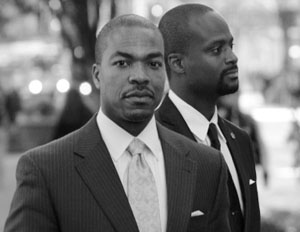 Donte Mills & Lennon Edwards, two of the countries top young personal injury lawyers, have been successfully building their firm Mills & Edwards, LLP to be recognized as one of the top litigation firms. As a result of hard work, perseverance, and a fierce determination to succeed Mills & Edwards have reached settlements and verdicts totaling millions of dollars for their clients. But beyond the million dollar cases that have been featured in New York Law Journal, and other publications these two trial lawyersÂ  are focused on delivering results with integrity.

Now with two offices located in New York City, and in Philadelphia the duo is positioning themselves as representation of choice in their jurisdictions. I got the chance to catch up with these two outstanding young Lawyers to discuss personal injury law, the barriers facing young African- American lawyers and advice for current and up and coming lawyers.

Tell us about your introduction into law.

Mills: My background in law began with a judicial clerkship for Judge George Overton in the court of common pleas in Philadelphia, PA. He was in the criminal division, and here I was exposed to the system, and the inequalities that the system can lead to if you are unfamiliar with it and how the courts work. This clerkship led me to the public defenders office and eventually a recruitment by the largest personal injury firm in New York. During the recruitment process I looked at the effect I could have on helping people whose lives have been negatively affected by incidents out of their control. The slip and falls, medical malpractice, or accidents. I saw that I could benefit these people lives directly and stayed with the firm for 7 years before opening up Mills & Edwards.

Edwards: I grew up in East Flatbush, Brooklyn, and my first introduction to the law was at the age of 14 years old when I was working in Manhattan family Court as a general clerk on the first floor. I would see how judges and lawyers intervene to help people resolve conflicts, and I decided then that I wanted to become a lawyer. I eventually became the first African American partner, and youngest to ascend to partnership at a large defense firm in New York. After eight years I made the switch to the plaintiff side and now here we are at Mills & Edwards.

What led you to personal injury law?

Mills: I always knew I wanted to be a trial attorney. It was important for me to be an attorney that could speak on behalf of someone, so that ruled out contract and transactional law because I didn’t feel that played to my strengths, and what I wanted to do for people. That really left two avenues for me which were criminal and personal injury. I soon realized that within personal injury you can be that advocate for someone who has been hurt or injured.

What are some of the major barriers for African-American lawyers getting representation at top law firms around the country?

Employees Close to Retirement Wish They Had Saved Sooner