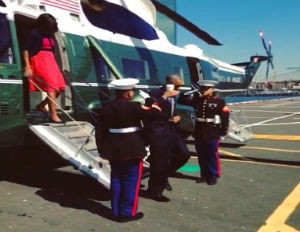 President Obama is getting lambasted on Twitter and the right-leaning news networks over a salute he gave while disembarking from his U.S. Marine Corps helicopter at the Wall Street landing zone in New York City on Sunday.

The president made the salute to two Marines with his right hand while holding onto a coffee cup from Starbucks.

The innocent but provocative gesture popped up in an Instagram video posted by the White House. The president is also wearing sunglasses with the first lady not far off.

Since the White House posted the photo on its Instagram account the criticism continues to pour in under the #lattesalute.

The so-called latte salute heard around the world is being called rude and disrespectful and in poor taste. They say the president should have shown more respect to the Marines saluting him and to the countless others who have made the ultimate sacrifice.

Others, like Fox contributor Allen West, say it highlights the president’s low regard and disdain for the U.S. military.

However, some military experts have said that while it is Marine protocol for servicemembers in uniform to salute their commander in chief, a civilian president isn’t required to salute back.

President Obama is not the first president to botch a salute. In 2006, President George W. Bush saluted while holding his dog Barney.

What do you think?