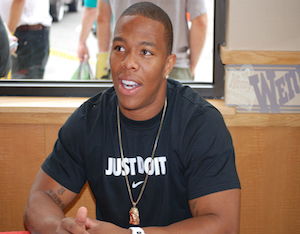 Ray Rice is paying a high price for the damage to his reputation. Don't just condemn. Take a lesson. Image: Wikipedia

Monday morning was quite the busy one for those surfing the web. TMZ got their hands on a video of Ray Rice violently knocking out his then-fiancÃ©e Janay Palmer inside an Atlantic City, N.J., elevator.

The brutal video quickly hit the airwaves as talking heads, Twitter, and everyone in between had something to say about the Baltimore Ravens running back’s behavior. Later on that afternoon, the team terminated their contract with Rice, and the NFL announced that he had been suspended indefinitely. But on our timeline, the conversation delved deeper than just the headline of ‘Rice K.O.’s FiancÃ©e’.

Writer Beverly Gooden used her social media status to hone the focus of the domestic violence discussion to two major points: #WhyIStayed and #WhyILeft. The twin hashtags immediately went viral, leading to widespread public sharing of stories and moments dealing with physical and emotional abuse. As many people were pointing fingers at Janay Rice (formerly Janay Palmer), it seemed accusatory that she would marry such a villain in spite of the abuse she suffered.

With Gooden’s attempt at changing the conversation, more and more people are speaking out and explaining the reasons why they did what they did in those situations. As more Twitizens shared their stories of domestic abuse, Black Enterprise decided to spotlight a few #WhyIStayed tweets to help draw awareness to the complexities of physical, verbal and emotional abuse between men and women.

Check out 10 #WhyIStayed social media reactions to the scandal on the next page.

[RECAP] Oprah’s ‘The Life You Want’ Weekend Stops In Atlanta