As the curtain goes up, a spotlight illuminates center stage, bringing to fruition a dream years in the making. On Monday, actor and writer, Layon Gray, who also directed the off-Broadway play, debuted “Black Angels Over Tuskegee,â€ which follows six heroic African American men who all share one goal: to become Tuskegee Airmen. Gray intertwines the story of their budding friendship against the backdrop of a World War II America, depicting their triumph over segregation, racism, and personal matters.

While Gray does not largely focus on the combat, he does look at the rigors and selectivity in joining the elite crew. From there, the story recounts the increased segregation the Airmen were subjected to when they were finally deployed. As impatience grows for the men anxious to engage in combat, so does a brotherhood, climaxing into a tragic finality. The play, which has been endorsed by the original Tuskegee Airmen, is performed by The Black Gents.

For S. Wesley Henderson, 89, “Black Angels Over Tuskegeeâ€ brought back memories of his time as an Air Force pilot. “The big thing is the race question,â€ he said, “I’ve never seen such discrimination in my life — even when we went to the field it was segregatedâ€ said the First Sergeant, who was also a part of the 99th Fighter Squadron depicted in the play.

The play’s opening night comes on the heels of the passing of notable Tuskegee Airmen and entrepreneurs, Percy Sutton and Lee Archer. Sutton, an intelligence officer in World War II, made his way to New York City after being rejected by white Southern recruiters in his hometown of San Antonio. He later went on to found a law firm with his brother, Oliver, and is credited for saving the legendary Apollo Theater.

Archer, the only black ace pilot on record who shot down five enemy planes in WWII, passed away last month at the age of 90. Archer broke racial barriers in the 1970s and ’80s as one of only a few high-ranking corporate executives at a major corporation. He joined General Foods Corp. in 1970 as manager of the company’s urban affairs division.

As many of the aging pilots pass away, their legacies are preserved for future generations through artistic depictions. A sold out crowd of 180 people arrived at St. Luke’s Theater in New York City to watch the show. About 12 Tuskegee Airmen from the New York chapter filled the audience taking photos before and after the play. The show, which was previewed in Los Angeles late last year, also won the 2009 NAACP Award for Best Ensemble, as well as the 2009 Artistic Director Achievement Award for Best Play.

The Black Patriot in America

The Cutting Edge: Uncle Sam Gives Back to Students 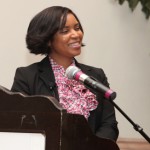 My Turn to Take the Stage