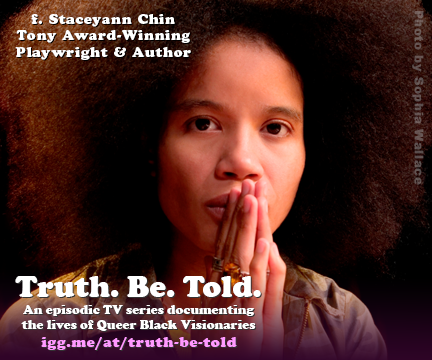 Filmmaker and activist Katina Parker has launched Truth. Be. Told., a documentary series that seeks to provide a platform for black LGBT people to tell their stories of challenge, radical self-inquiry, transformation, and triumph.

“As queer black people we have been pushed to question everything about our multiple layers of identity – race, gender, sexuality, class, vocation – and then reconcile who we know ourselves to be with the identities our families and society at large have constructed for us,” says Parker, an instructor with the Center for Documentaries Studies at Duke University.

Each half-hour episode will feature an intimate conversation with a noteworthy interviewee as they discuss their lives, loves, and passions, as well as their experiences, realities, and identities that fuel them. To date, more than 50 people have committed to the project as interview subjects for seasons 1 and 2, including poet Stacyann Chinn, widely known as the co-writer and original performer in the Tony Award-Winning Russell Simmons Def Poetry Jam on Broadway; former New York Times Editor and former Essence Magazine Executive Editor Linda Villarosa; Alexis Pauline Gumbs, Co-creator of the Mobile Homecoming Project; and Patrik-Ian Pol, creator of Logo TV’s Noah’s Arc. Still in the developmental stage, Parker seeks to create 122 episodes in collaboration with 122 professionals, entertainers, educators and and other noteworthy – but not necessarily famous LGBT people.

Chin says that sharing their stories is one way to make LGBT people more visible, more human. “As Audre Lorde in her infinite wisdom said ‘Your silence will not protect you.’ Telling our stories, sharing our experience is one way of breaking that silence that has gone on for longer than it should. Truth. Be Told. is a way forward in that telling,” she adds.

“We have only scratched the surface when it comes to visibility for black LGBT people,” says Parker. “While our stories are told more frequently than they used to be, our lives are shared in sound bites. We need more prime time real estate in media so that we can more fully engage in dialogues about who we are and what we stand for,” she adds.

Parker, who directs the series, previously served as a communications consultant for GLAAD (Gay & Lesbian Alliance Against Defamation) and the National Black Justice Coalition. Executive producers for Truth. Be. Told. include Jennifer MacArthur, National Engagement Consultant for Independent Television Service, and Carol Ann Shine, who produced the TV series Noah’s Arc for Logo as well as the feature film Noah’s Arc Jumping the Broom.

Parker set out to raise $10,000 earlier this year, coming in short of her goal at a little under $4,000. She is now on a mission to raise $4,000 by June 17, 2013 through an IndieGoGo campaign in order to cut a pilot episode to be distributed through digital outlets such Vimeo on Demand, HuluPlus, Netflix and iTunes as well as network distribution via TVOne, BET or Showtime.

IndieGoGo campaign donations start at $5 and perks include digital downloads, postcards, and a producer credit. For more info about Truth. Be. Told. click here.