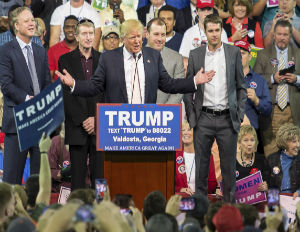 On Tuesday, Donald Trump’s campaign manager, Corey Lewandowski, was charged with one count of simple battery.

The charge stems from an altercation between Lewandowski and former Breitbart reporter Michelle Fields at a campaign event in Jupiter, Florida. Fields and Washington Post reporter Ben Terris accused Lewandowski of roughly grabbing Fields’ arm and pulling her to the ground after she attempted to ask Trump a question about affirmative action.

The incident immediately made headlines after Fields tweeted a picture of the bruises she stated Lewandowski gave her.

I guess these just magically appeared on me. @CLewandowski_ @realDonaldTrump. So weird. pic.twitter.com/oD8c4D7tw3

@MichelleFields you are totally delusional. I never touched you. As a matter of fact, I have never even met you.

However, according to footage released today by the Jupiter Police Department, Lewandowski lied. The footage clearly shows him reaching out to grab Fields.

Lewandowski turned himself into police on Tuesday morning, according to the Palm Beach Post.

In a statement released by both the Trump campaign and Lewandowski’s lawyers, Lewandowski maintained his innocence.

“Mr. Lewandowski is absolutely innocent of this charge,â€ his lawyers Scott Richardson and Kendall Coffey said in a statement. “He will enter a plea of not guilty and looks forward to his day in court.â€ He’s scheduled to appear on May 4.

Lewandowski is scheduled to appear in court on May 4.