President Donald Trump, during a recent press briefing at the White House, stated that “more White people” die at the hands of police than Black people, according to CBS News.

During the interview, CBS News’ Catherine Herridge asked Trump to explain why Black Americans are “still dying at the hands of law enforcement in this country.”

President Trump tells @CBS_Herridge that “more White people” are dying at the hands of police than Black people. Watch excerpts on CBSN, more tonight on @CBSEveningNews and tomorrow on @CBSThisMorning https://t.co/NeBLT0LG0p pic.twitter.com/XIwyARJBBl

According to a study published in 2018, statistics have shown that Black men are roughly 3.5 times more likely to be killed by law enforcement than their White counterparts. An additional study released last year found that 1 in 1,000 Black men in the U.S. can expect to die at the hands of police over the course of their lifetimes.

According to WUSA, American Civil Liberties Union’s Jeffery Robinson issued a harshly worded statement saying Trump’s response “not only ignores the fact that per capita Black and Brown people are disproportionately killed by police, it provides the foundation for the dangerous and unconstitutional police practices that result in the deaths of Black people with regularity.

“Trump’s racism is so absolute that he continues to refuse to give even a tacit acknowledgment to the epidemic of police violence against Black people in America,” Robinson stated, accusing Trump of “using the violence and suffering perpetrated against Black communities as a white-supremacist dog whistle ahead of the coming election.”

Trump also defended the Confederate flag and statues, which has a long history of being tied to racists and has been said to be appealing to White supremacists. Trump claimed in the interview that he believed the debate over the flag is a freedom of speech issue.

“Well, people love it and I don’t view — I know people that like the Confederate flag and they’re not thinking about slavery. I look at NASCAR — you go to NASCAR, you had those flags all over the place. They stopped it.” 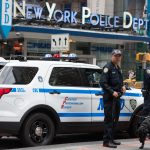 Black Leaders Call On NYPD To Bring Back Anti-Crime Unit 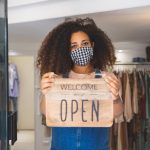