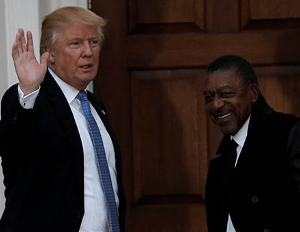 Donald Trump told NBC News‘ Craig MelvinÂ that there is something going on in America that isn’t allowingÂ racial division to fully heal, during an exclusive interview at the National Museum of African American History and Culture.

Trump’s Comments on the National Museum of African American History

TheÂ National Museum of African American History and Culture, a SmithsonianÂ institution, is the only national museum devoted exclusively to the documentation of African American life, history, and culture. It was established by Act of Congress in 2003, following decades of effort to promote and highlight the contributions of African Americans. To date, it has collected more than 36,000 artifacts and nearly 100,000 individuals have become charter members. The Museum opened to the public on September 24, 2016.

Trump pointed out how much people love the museum, noting his wife couldn’t stop talking about it, after her visit two weeks ago. “Great, great place, and a great job they’ve done,â€ he tells Melvin. “It’s something that we’re very proud of.â€

“And part of the beauty of what you’re doing here with the museum and the success of the museum–success is very important because it’s doing tremendous numbers, tremendous numbers of people are coming in,â€ Trump continues. “I think that really helps to get that divide and bring it much closer together–if not perfect,â€ reports MSNBC.

While standing in the Martin Luther King, Jr, section of the museum’s exhibition, Melvin asks the president, “Here we are in the middle of Black History Month; here’s a man [referring to Martin Luther King, Jr.] who devoted his life to trying to bring people together in this country. You’ve said that’s something that you want to do as well. Specifically, how do you want to do that?â€

“Well, we’re a very divided nation. And we have been for many, many years, decades. I mean, you go back to the founding. And I would just like to see if we could bring people together. So many bad things happening. And by the way, so many great things happening like the museum. But we’re going to try very hard to bring people together in a much stronger way. It’s just so divided, so sad to see,â€ Trump responds.

In response to Melvin’s questions regarding recent surge in anti-SemeticÂ threats and crimes in Jewish centers across the U.S., Trump also addressedÂ this question by stating, “I think it’s horrible. Whether it’s anti-Semitism, or racism, or anything you want to think about, having to do with the divide. Anti-Semitism is, likewise, it’s just terrible. And you don’t know where it’s coming from. But, I certainly hope they catch the people. I think you maybe have had it for longer than people think, and maybe it gets brought up a little bit more. But, I will tell you that anti-Semitism is horrible, and it’s going to stop, and it has to stop.â€

Meeting the Needs of Sex and Gender Minority Youth

Black Boys Build Businesses in the Age of Trump