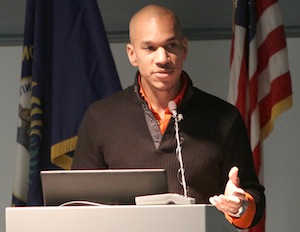 You’ve seen the commercials. Actor Idris Elba—the infidelity exception of women all over the world—is the sexy and unflappable super spy, navigating a world of danger, false faces and intrigue in a sleek, powerful driving machine befitting a man with a license to kill. Hunted by enemy operatives, Elba repeatedly eludes his predators because while their intelligence sources say he’s driving an Avalon, what he’s driving no longer fits the description. The tagline of the campaign: “Only the name remains.”

Well, if Elba is James Bond, allow me to introduce you to Q: 2013 Toyota Avalon Principle Engineer Rob McConnell. A principal engineer for Body Engineering at Toyota Technical Center in Saline, Michigan (a division of Toyota Motor Engineering & Manufacturing North America, Inc.), McConnell is a team leader for the Avalon Body and Exterior Group, responsible for transforming an upscale mid-size sedan known for quality and reliability, into a seductive, powerful vehicle worthy of high-speed chases and exciting games of intrigue.

During a recent visit to tour Toyota Motor Manufacturing Kentucky (TMMK), where the new Avalon, is built, I met with McConnell, TMMK President Wilbert James Jr. (who is ranked among the Black Enterprise 100 Most Powerful Executives in Corporate America), Toyota Product Communications Vice President James H. Colon, and others involved in the rebirth, making and marketing of Toyota’s mid-sized luxury offering. I also experienced the opportunity to drive the new Avalon myself. (My code name: Agent 006. I’m assuming I have a license to rough people up.) It was mission accomplished as soon as I looked at the car–the Avalon has been transformed from an old faithful campanion, to an athletic and aggressive Alpha dog. The look was confirmed by the driving experience.

The new Avalon has the distinction of being the first Toyota conceived, designed and manufactured entirely in the United States, a first for the Japanese car maker. As principal design engineer, McConnell, 32, has the opportunity to follow in the footsteps of other African Americans who have made significant contributions to the world of auto design, including General Motors Global Design VP Ed Welburn (who led the resurrection of the Cadillac brand) and Chrysler Group’s SRT Brand and Motor Sports President and CEO Ralph Gilles (credited with the design of the award-winning 2005 Chrysler 300).

Of course, McConnell would likely never say that himself, in part because his is a quiet, laid-back confidence and in part because the ‘T’ in Toyota stands for team. Here’s what the University of Michigan alum, who holds a bachelor’s of science degree in mechanical engineering, shared with me.

BlackEnterprise.com: Tell me about the birth of this idea and what you were trying to accomplish with the new Avalon?

Rob McConnell: With the Avalon, we saw there was a need to maintain our commitment to continuous improvement and high quality. Our competitors have dramatically improved the style of their vehicles, and we need to respond to that, to get better, to appeal to that customer that was looking at the style of the vehicle, along with the quality.

For a long time, when we talked about competition in the global automotive marketplace and the American auto industry in particular, the battle was fought on grounds of quality, and the quality still has to be there. Then, it became a battle of offering the best tech, which still exists. But as the playing field seems to have leveled across brands and categories for both quality and technology, it seems that people underestimated the value of style and how it really can be the difference maker in the marketplace. How did that impact what you and your team tried to do with the Avalon.

We saw that as an opportunity to make ourselves better and to challenge ourselves more. Typically, we don’t have as many areas to challenge ourselves that reflect such dramatic, bold styling. We wanted to make sure we could maintain our high manufacturing quality and assembly quality, the longevity of quality in our vehicles, but not compromise the style and meet the target of a sleek vehicle.

You mentioned earlier, when talking about the importance of the customer experience, that this was a rare opportunity to design a car that would appeal to you and your peers on the design team—a car that you would drive.

At our Toyota Technical Center in Michigan, we have a very young workforce. This vehicle gave us a great opportunity to really interject some of our personal feeling into the design, and say, ‘This is a car that I’d want to drive.’ We wanted to jump on this opportunity, to take advantage of it, and to really speak up.

When we are able to interject our young energy and innovation, and merge that with the teamwork core value that Toyota culture is all about, the result speaks for itself.

How cool is it that at least one of the people inspired to be tied to the new Avalon is Idris Elba? Elba is a long way from “it’s a nice, quality car—something my grandfather would be happy to drive.” How does it make you feel as a designer to see that interpretation of your vision?

That’s really cool, because he’s very popular, globally appealing; he’s done all kinds of different films, covering a multitude of genres and markets. So when he talks about doing [his first commercial], and it’s with Toyota, and the Avalon, for him to jump on board and want to be a part of that–that’s amazing.