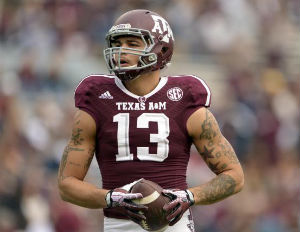 Mike Evans was Texas A&M's leading receiver during his two years at the school.

Texas A&M wide receiver Mike Evans flew under the radar as a member of the Aggies football program. What with the on-field excellence of his quarterback, Johnny Manziel, and the emergence of his nationally-renowned coach, Kevin Sumlin, Evans was probably the third-most known individual in College Station.

To everyone except NFL scouts, maybe.

After making himself eligible for the 2014 NFL Draft, Evans hired Chicago-based Priority Sports, where he will reportedly represented by Deryk Gilmore.

The news was first reported by Yahoo’s Rand Getlin.

“We are excited to have Mike Evans with the Priority Sports family,” Gilmore told Sports Agent Blog. “Mike is a big, physical, imposing receiver who can go up and get the ball and make yards after the catch. [He’s a] student of the game and his determination to be great is what will make him a Pro Bowl receiver. Teams will love him because he loves football.”

In 2013, Evans — rated in the top three in wide receivers available in every major draft rankings system — had 69 receptions for 1,394 yards and 12 touchdowns. The blog reported he ranks in the Texas A&M’s top five in every major category for receivers, despite playing only two years under Sumlin.

The Pros and Cons of Hiring Remote Workers