The Greatest Muhammad Ali Dead at 74 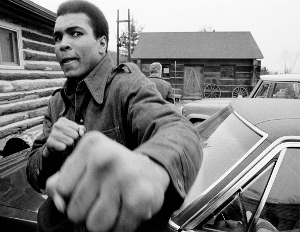 “Muhammad Ali was the grandson of a slave. Let that sit for a moment,â€ wrote Entrepreneur and Activist, Michael Skolnick on Twitter this morning.

According to reports, Muhammad Ali passed away due to respiratory complications at 74, on June 3 in Phoenix, Arizona. Â Known as the “greatest heavyweight boxing champ of all time,” Muhammad Ali was an activist, a storyteller, and a devout man of faith. Â A symbolÂ of Black excellence and an American cultural icon,Â we bid farewell to one of “the greatestâ€ with several Muhammad Ali quotes that give us a glimpse into the mind of a legend.

What’s your most memorable Ali quote?

Why Muhammad Ali Will Always Be The Greatest