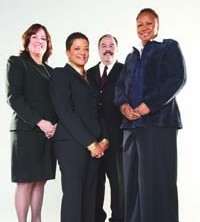 Part of the reason McDonald’s has been the model of business diversity has been executives such as Harris driving the process. Such leadership has placed her on the inaugural roster of black enterprise’s Top Executives in Diversity. This group represents C-suiters and other senior managers at the nation’s 1,000 largest publicly traded corporations and 100 leading global corporations with strong U.S. operations who oversee and develop programs to include and advance African Americans and other ethnic minorities, women, the disabled, and the LGBT (lesbian/gay/bisexual/transgender) community among the employee, senior management, corporate board, and supplier ranks. Most important, these professionals view such efforts not as initiatives to communicate good corporate citizenship but as vital to expanding market share, building revenues, and increasing the bottom line.

This stewardship becomes more important as diversity has been increasingly placed on the back burner in a post-recession environment. Just review the results of a two-year global study, Developing the 21st Century Leader, conducted last year by the consulting group AchieveGlobal. In ranking six areas critical to leadership success, business initiatives to boost profits earned a No. 1 ranking while diversity fell to the bottom of the list of priorities. Additionally, the top executives on this roster can be found in less than 150 companies from a universe of 1,100. But in the face of the study and statistics, diversity is needed as corporations must become more globally competitive and our nation becomes more ethnically diverse. In fact, the National Journal recently reported that the 2010 Census revealed that America is increasingly becoming a “majority-minorityâ€ nation. It found that the non-Latino white population declined from 69.2% in 2000 to 63.7% in 2010 while the minority population expanded from 30.9% in 2000 to 36.3% in 2010.

True diversity happens at the top–that’s why Black Enterprise focused on this select group. “We are guided by our Performance with Purpose goals, which include our commitment to invest in our associates to help them succeed and to contribute to better living standards in the communities we serve,â€ says Pamela Culpepper, PepsiCo’s senior vice president, global diversity and inclusion officer who works closely with Chairman and CEO Indra Nooyi on the Global Diversity and Inclusion Governance Council, which is comprised of internal and external leaders from all four continents of the beverage and snack manufacturer’s international business. Another leading diversity champion, Tara Amaral, vice president of talent acquisition and chief diversity officer for payroll and tax filing processor Automatic Data Processing Inc. (ADP) seeks to expand the employee and management pipeline, in part, through the CEO-led Executive Diversity Council, a body of the most senior executives who set overall diversity management direction at every level. Moreover, diversity and inclusion are a component of ADP’s executive performance and compensation.