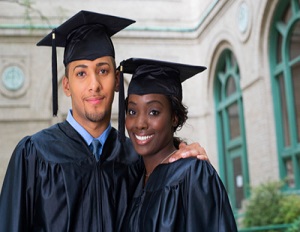 While the unemployment rate for those with a high school diploma still remains higher than those with a college degree, a new report released from the career site Glassdoor shows that there are still decent employment opportunities for non-degree holding professionals.

The survey, which based its results entirely off of employee feedback, ranked Costco as the top company for high school graduates, with employees having great potential for career advancement.

“For people who have no desire to get a degree, or a trade, Costco offers great salary and all the benefits you need for yourself and your family. All employees are great to work for, seeing how they hold everyone at a high standard,” says one Costco employee.

Costco’s top ranking doesn’t come as much of a surprise considering it’s a company that pays its employees well above the minimum wage pay rate. According to Glassdoor, the average hourly salary for a cashier at Costco is $14.87, compared to its big competitor Sam’s Club who pays its cashiers $9.36 per hour. As the second largest retailer in the U.S. behind Walmart, Costco provides 80 percent of its employees with company-sponsored health insurance, providing further proof of the quality treatment its employees receive.

In addition to Costco, other big name companies such as Wholefoods, Chipotle, and Nordstrom made the list, with Home Depot rounding out the top 10 spot.

Check the chart below to see the company rankings, as well as career opportunity ratings that were based on a five-point scale.

New Witness Claims Michael Brown Was Shot With ‘Hands Up’