The South Proves to be Hub for Black Business Owners 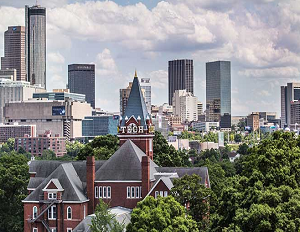 For aspiring entrepreneurs who want to know where their business will most likely thrive, it looks like the south is where it’s at. NerdWallet analyzed 111 metro areas in the United States with populations over 100,000. The report revealed the top 10 cities based off of metrics like median income for the black population and percentage of black-owned businesses with paid employees, and the most robust cities for black entrepreneurship were all located in the southern region of the country. SeeÂ if your cityÂ made the cut for black business owners.

Columbus is on the border of Georgia and Alabama.Â It is aÂ hub for the aerospace industry, automotive manufacturing, defense, technology and tourism.Â The city’sÂ Uptown district is alsoÂ a popularÂ locationÂ for locally owned restaurants, boutiques and salons. Over a third of businesses in Columbus are black-owned, including the historic Sconiers Funeral Home and Citizens Trust Bank. The Greater Columbus Georgia Chamber of Commerce offers resources for new business owners.

Georgia has the nation’s third-largest black consumer market, worth over $73 billion, and the state’s capital has a fairly affordable cost of living and “a strong business environment.” The Atlanta Metropolitan Black Chamber of Commerce hosts monthly events and mentoring programs to help local businesses, and Atlanta’s Minority Business Development Agency provides resources. Some of the city’s noted black businesses are B&S Electric Supply Co. and Engineering Design Technologies.

Memphis has a significantÂ percentage of black-owned businesses andÂ an affordable cost of living, as well as a rich culture.Â Along withÂ music, film and TV, Memphis thrives in bioscience, green industry and manufacturing. The Black Business Association of Memphis lends one-on-one counseling, training sessions and networking events, and theÂ Greater Memphis Chamber has a Small Business Council that provides similar resources for entrepreneurs.

A few bonuses of the nation’s capital are a growing technology industry, a population that values educationÂ and a quality mix of public and private sectors. Presidnt Obama is one of many famous customers to stop by Ben’s Chili Bowl,Â has a long and successful run in theÂ  the capital since 1958.Â Entrepreneurs who want to launch their businessÂ will find resources at the National Black Chamber of Commerce, the Northern Virginia Black Chamber of Commerce and BizLaunch, an Arlington Economic Development entrepreneurship program.

See the other cities here in the original report.