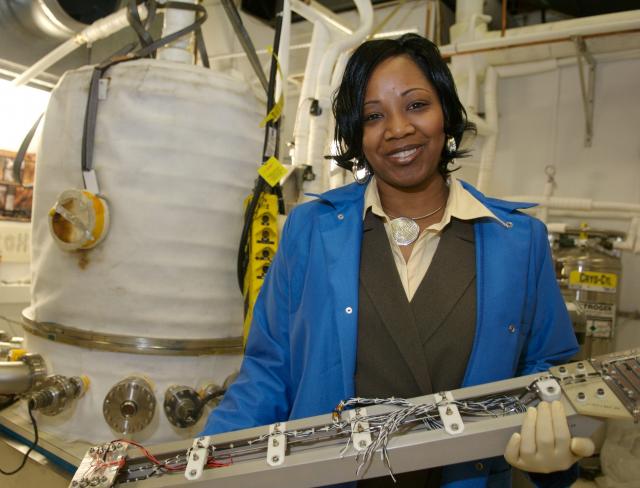 Over the next few days BlackEnterprise.com will introduce to you three digeratis who are reshaping the world.Â  In the first of our three-part series, meet NASA’s Donya Douglas.

As a thermal engineer at NASA, Donya Douglas’ research isn’t as far out as one might think. In fact, you might not have to reach any further than your lap to benefit from the technologies that she designs.Â  Douglas, an instrument systems branch associate head at NASA, conducts heating and cooling research to help control temperature and avoid loss of performance on space crafts, such as the Hubble Space Telescope, and in laptop computers.

You can also find the technologies she’s helped create used to produce heat in water systems and to provide humidity and temperature control in office buildings.

Douglas’ extraordinary interests in science were instilled at a young age, and when she spoke with BlackEnterprise.com she emphasized how important it is that she gives back to help young black students generate that same zeal for technology.

BlackEnterprise.com: How did you become interested in your career field?

Donya Douglas: I was always drawn to science and math during my early school years, and had a keen interest in how things worked. By the age of ten, I knew I wanted to be an engineer and by the time I graduated high school, I knew I wanted to work for NASA.Â  During my sophomore year, when I was selected for an internship with NASA Wallops Flight Facility, I eagerly accepted. Working at NASA early allowed me to broaden my exposure to many different engineering disciplines, and also gave me an opportunity to see both women and minorities in highly technical fields.

What are some of the challenges African Americans face in the science and technology fields?

While there has certainly been an increase in the number of minorities and women in these fields, historically African Americans have been underrepresented in science, technology, engineering, and math (STEM). I believe that this is primarily due to the fact that we are not exposed to the application of science and technology early in our academic pursuits.Â  As a result, these areas may not seem relevant or even interesting. Additionally, we often believe that math and science are too difficult.Â  Believing that you can do well in these areas is more than half the battle. I intend to remain in a technical management position. This will allow me to mentor and play a larger role in the development of younger professionals.

How did you overcome those challenges?

Very early in my academic experience, I had teachers that guided me through my schooling.Â  They provided opportunities for me to participate in extra-curricular activities involving science demos, field trips, math competitions, etc.Â  My father raised my