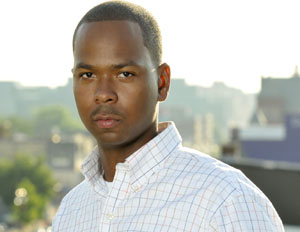 This month, BlackEnterprise.com presents Month of the Man, where we bring you career features tailored for male leaders of color all over the world. This week, we caught up with 28-year-old restaurateur Avery Leake on his career transition and tips for young bosses on the come up.

Ride down D.C.’s historic H Street corridor and you’ll see that a lot has changed over the years. From long-standing businesses falling under the realm of gentrification, to new ones popping up, it’s clear that the area that was once filled with majority minority-owned businesses is slowly taking on a new look.

But thanks to 28-year-old entrepreneur, Avery Leake, a nugget of hope lies on the 1300 block of H Street with his new establishment, Avery’s Bar & Lounge, that opened in January.

Known as one of the youngest black bar owners in the District, this native Washingtonian felt an obligation to start a business that provided a space for young, black professionals like himself to hang out.

“My grandparents owned a business on H Street years ago, and I wanted to keep the legacy going,â€ Leake says. “It’s a historically black area, but once gentrification started, there weren’t too many popular places for blacks to hang out, and I thought it was a niche market for my business.â€

Knowing at an early age the importance of working hard and having a business mindset, Leake admits to having worked 24 jobs in his life after his grandfather pushed him at age 11 to look for employment.

“[My grandfather] was illiterate, and getting a job was the only thing he understood. When I did that, I started meeting people at a young age who invested in me and became mentors,â€ says Leake as he reflects on the reason he started the non-profit The Fellaz Youth Foundation.

The Fellaz Youth Foundation, which initially started off as a social group of about 10 friends hanging out and hosting events in the city, has now turned into a mentorship program that focuses on giving back to young black men.

“We’re all doing positive things, from working in law enforcement, to music, to working on doctorate degrees, and thought we should take it to the next level and give back to the community,â€ says Avery, who is co-founder of the organization.

From hosting their annual prom charity event—where local boys are selected from an essay contest to get prom ensembles—to speaking at career fairs to hosting neck-tie seminars and college prep programs, The Fellaz Youth Foundation is something that Avery places high on his priority list.

“Every job I got was through networking, and I just feel an obligation to give back,â€ adds the D.C. native. “I know the importance of mentoring and I know that I wouldn’t be where I am today if it wasn’t for mentors.â€

After leaving his government job a year before opening the bar, Avery says the biggest piece of advice he can offer for the next young black male who wants to follow in his footsteps is to have a passion for what you do.

“When things get challenging and hard, all you have is your passion and will to keep going,â€ he says. “Have a passion for what you do and a goal in mind, and stay humble because any and everybody can help you.â€