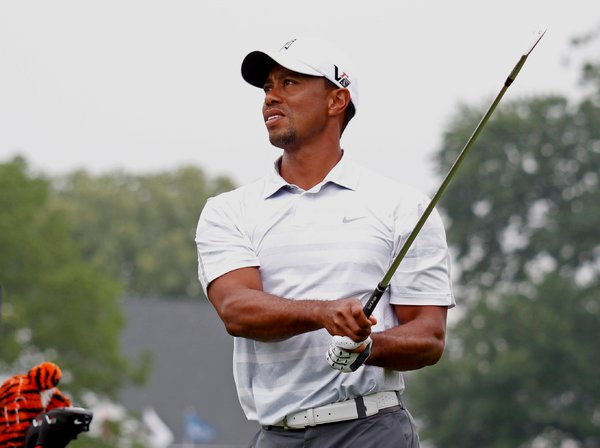 Tiger Woods during a practice round at Merion Golf Club. The U.S. Open begins Thursday. (Reuters)

Tiger Woods has a chance to win his fifth U.S. Open this week at the historical Merion Golf Club just outside Philadelphia. The major story lines? He’ll play in an electric group on Thursday and Friday with the No. 2 and No. 3 golfers in the world, Rory McIlroy and Adam Scott. Sergio Garcia, he says, still has not personally apologized for his statement about making peace with Tiger after a recent spat by making him fried chicken. And a win this week would put him three majors behind the all-time leader, Jack Nicklaus.

But a member of the media at Tuesday’s noon press conference, amid the history and paegentry of Merion’s mystique related to Bobby Jones, asked Tiger to reflect on African American pioneers Calvin Peete and Charlie Sifford and their impact on his life.

Said Tiger, “[They] led the way for the likes of Lee Elder. It was a tough time for Charlie to go through what he went through, but he paved the way for a lot of us to be where we’re at.

“I know my dad probably wouldn’t have picked up the game if it wasn’t for what Charlie did.”

Woods is enjoying a stellar 2013, in which he’s reestablished himself as the No. 1 golfer in the world. For some, he may not be all the way back from the knee injury that caused him to rebuild his swing until he wins a major. At any rate, he has four wins in eight starts this year, including a win at the Players’ Championship last month.

On the business front, Woods was reported to be on the cusp of a brand new deal with Nike, which was to make him one of the richest endorsers in sports. It was not clear Tuesday if a deal had been reached, but Nike did release a 30-second spot recently which had Tiger swinging a driver, and another to promote the new TW ’14 golf shoe.

But on Tuesday, the focus — for just a little while — was on the legacy of African American achievement in which Woods follows.

“I’ve always called him my grandpa, the grandpa I never really had,” Woods said of Sifford. “I’ve gotten to know him through the years and it’s been fantastic. We owe a lot to him and all the pioneers that have paved the way for us to be here.”