This Day In History: Hall of Famer Jim Brown Was Born 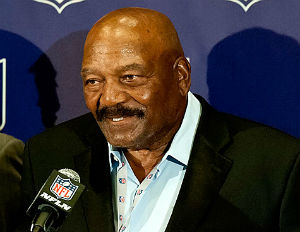 Jim Brown was born on St. Simons Island, Ga., on Feb. 17, 1936. The NFL Hall of Famer faced many obstacles at an early age, as his father abandoned the family just two weeks after his birth, along with his mother who moved to New York to take a job as a maid. Brown would be cared for by his great grandmother. When he was eight years old, he joined his mother on Long Island, playing on the Manhasset High School football team, which was largely dominated by white people. He averaged 14.9 yards per carry, easily earning him a spot on the team at Syracuse University.

During his college career, Brown ruled the football field, in addition to being a talented basketball and lacrosse player. An exceptionally gifted athlete, he began to receive nationwide attention as a running back, and was selected to play on the Cleveland Browns as the sixth overall pick during the 1957 NFL draft. He quickly was honored with the title of Rookie of the Year, and earned a whopping 942 yards just during his starting season. Throughout the next seven seasons, Brown became the leading figure for all NFL running backs, and is mentioned as the greatest player in NFL history by many.

[Related: This Day In History: First Student Enrolls at University of Alabama]

During the 1964 NFL championship, the Browns beat the Baltimore Ravens at a high score of 27-0, where Brown ran for 114 yards. His next career move came as a shock to the world, when he announced his retirement at age 30 and stated he would be pursuing a career in the movie industry. Brown was inducted into the Pro Football Hall of Fame in 1971, and kept his word as he made appearances in over 30 films such as ‘The Dirty Dozen’ and ‘100 Rifles.’

As a loyal supporter of African Americans and equality, he helped black-owned businesses build the Negro Industrial Economic Union, along with designing the Amer-I-Can program, which was developed to help change the lives in young gang members. Brown continues to be an icon of strength, inspiration, and an amazing role model for young black athletes.