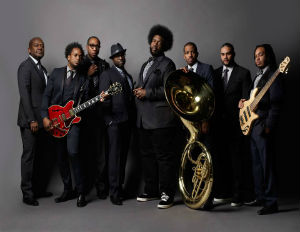 After learning that $1.1 million had been cut from the budget of the Philadelphia High School for Creative and Performing Arts, The Roots decided to raise funds to help meet the educational needs of their alma mater.

The Grammy-winning hip-hop band formed the CAPA Foundation to provide funding for books, classroom supplies, extracurricular activities, and the renovation of CAPA’s theater.

“I’m taking this as a state of emergency,” Roots drummer Ahmir “Questlove” Thompson tells NBC Philadelphia. He and band member Tariq Trotter, better known as Black Thought, formed the band in 1987 after meeting at CAPA, which is regarded as Philadelphia’s premiere performing arts high school.

“It cultivated us. It educated us,” Thompson said of CAPA. “This is more than just pay it forward or celeb guilt. This is necessary. … It keeps you out of trouble. It helps develop your personality. If you take that away, you’re just a machine.”

Since 2012, budget cuts have resulted in the school cutting 19 teachers and staff members, with many extracurricular activities being eliminated and the school’s annual theater production being canceled.

The Roots non-profit organization aims to raise $500,000 annually for the first five years and then $1 million annually for each year after that.

“We’re lending our celebrity to a school where we began,” said Trotter. “In essence, it’s literally a back-to-the-roots situation for us.”

BeyoncÃ© Is Highest-Paid Female Music Star In the World