Why You Should Go See 'The Rise of the Guardians' [Review] 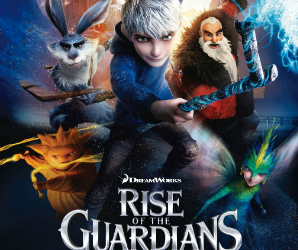 Who says cartoons are for kids?

The preconceived notions of some of our childhood heroes are slightly distorted in the newly released movie, “The Rise of the Guardians.” As a child, those images should stay as we remember. As an adult, it actually makes them more appealing.

The film, based on the William Joyce book series, “Guardians of Childhood,” reveal our childhood heroes as protectors of the children and the belief of their belief in said characters. Santa Claus (voiced by Alec Baldwin), the Easter Bunny (Hugh Jackman), the Tooth Fairy (Isla Fisher) and the Sandman (Well, he has no speaking lines, so, no voice needed!) have been the guardians (of childhood) for years; and things have been easy in keeping the children’s belief in them intact. But, of course, that is being threatened by an enemy so powerful and bent on revenge that he almost seems unstoppable.

The Bogeyman aka Pitch (voiced by Jude Law) has devised a nearly flawless plan to take away the children’s belief, along with their happiness, in the name of being recognized and feared more than all the other characters. And this is where our main character comes in! Unlike the other characters mentioned, Jack Frost (Chris Pine) has something in common with Pitch. Both characters don’t get the recognition the others get, but, Jack, although disappointed about not being acknowledged, hopes to get that, despite being invisible all these centuries.

Jack Frost is the “missing link” according to the “man in the moon” to defeat the menacing enemy approaching the heroes. Although, initially reluctant, Frost is promised to discover his lost childhood if he becomes an official guardian.

I never like revealing plots and twists as I wouldn’t want to take the joy of discovering what I had the pleasure of finding out on my own. But, I highly recommend seeing the movie (with or without a child) for 2 important reasons. One, it’s a great movie and I am already predicting a sequel! Two, the director, Peter Ramsey, is the first black person to direct a major studio’s blockbuster animation film. No doubt, I don’t anticipate this being the only movie he will direct. Peter Ramsey did an excellent job for his directorial debut!

The Many Faces of Tracey Lee: From Rapper to Attorney