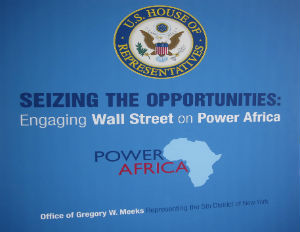 While on an official visit to Cape Town, South Africa, President Obama announced the Power Africa initiative – a drive to “double the number of people with access to electricity in Sub-Saharan Africa.”

While the development boom on the continent is unmistakable and the investment opportunities enormous, nearly 600 million people in Africa still lack access to electricity.

The president promised $7 billion in U.S. taxpayer money to fund the drive to provide at least 10,000 megawatts of electricity to sub-Saharan Africa. That was June 30, 2013.

Since then, U.S. technology, engineering and companies focused on power generation and energy management have been on the ground building mini-grid and off-grid power structures, transmission lines and distribution networks across the continent.

Now that some of the ground work has been laid down, they’re on the hunt to find investors, energy and resource private equity firms, entrepreneurs and banks to broker power dealsÂ  for businesses looking to tap into emerging markets.

One year later On Friday, June 13, the power players assembled in New York city to highlight the opportunities, invest in the lucrative initiative and harness the growth story.

Inside a packed house, at the Ted Weiss Federal Building in the financial district and the site of the African Burial Ground National Monument, Congressman Gregory Meeks, a democrat from New York, presented “Seizing the Opportunities: Engaging Wall Street on Power Africa.”

He made it clear that the financial opportunities are boundless, not just for the major banks and billion dollar businesses gathered in the rooms, but also for the little guys with a keen eye for investment opportunities and the courage to take the risk.

Meeks says, “What’s also important here today is for the small, medium sized, women and minority owned business owners to get involved. We need more minority firms that are part of the chamber. Their voice must be included.”

The event was split into two panel discussions. The first, moderated by Ambassador Bisa Williams, focused on different ways U.S agencies can assist investors in “identifying and structuring projects, obtaining financing or guarantees and building partnerships with African entities.” Agencies featured on the panel included (USAID), The World Bank Group, the U.S Chamber of Commerce, the Milken Institute, and the Export-Import Bank of the United States (Ex-Im).

The second panel was moderated by the Wall Street Journal‘s Dan Keeler. This one focused on letting companies, banks and investment firms based in the U.S., well-known for their engagement in Africa, share their insight on investing in Africa and where they see the next big opportunities

Among the power players on this panel, the Carlyle Group, General Electric, Standard Bank Group, Denham Capital, Standard Chartered, and several other companies. Opening and closing remarks were delivered by Congressman Meeks.

Representatives from more than 50 private and public companies lined up at the event, vying to light up the continent, was symbolic of the potential financial bonanza and the growing refusal of U.S. businesses to be left behind.

Investing in Africa: Why Are Minority Business Owners Slow Rolling?