The Passion of Sports Fans Can Lead to Violence...But Only If You Let It 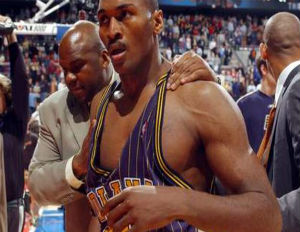 The following is a feature by The Shadow League’s Yussuf Khan:

Wednesday was the 10-year anniversary of the “Malice at the Palaceâ€ andÂ I still feel the same way asÂ when I first watched it happening live in my living room, jumping around and yelling for the entire neighborhood to hear.

Ron Artest was in the right.

Yes, I said it; Artest was in the right for running after the fan that STARTED the “Maliceâ€Â and so were his teammates whoÂ rushed to his defense in the stands.

The passion of sports fans can sometimes lead to the violation of theÂ boundary that exists between fan and athlete. They might be millionaires who play for their favorite team, butÂ these athletes are grown men who do grown men things. The Pacers that ran up into the stands to defend their teammate were displaying what we are taught as young athletes; you have your teammate’s back. So by going in the stands to protect Artest, they were simply adhering to the lessons that are instilled at a young age in sports. I’m sure some of you are reading this and complainingÂ about how wrong my viewpoint is and that athletes need to control themselves, so I will rationalize.

Susan L. Taylor Talks Mentorship and Passing on a Legacy via CARES

Deck the Halls With Savings: 5 Tips to Slash Your 2014 Tax Liability