The NBA Is Hosting A Camp In Cuba 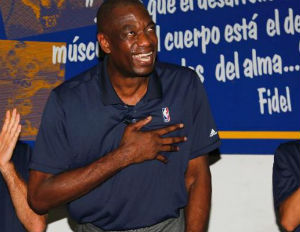 As the NBA Playoffs rage on, there is more exciting news coming from the league – April 23rd marked the NBA’s first official trip to Cuba. In a press release issuedÂ earlier this month, the league announced that it would co-host a 4-day basketball camp for Cuban athletes, alongside international basketball organization FIBA.

The event is special for many reasons, but particularly because this marks the first U.S. sports league to visit the country since President Obama restored relations earlier this month.

In a report from USA Today, Deputy Commissioner Mark Tatum expressed his high hopes for the camp saying, “Of all of the places we’ve been to, it’s amazing to think this is the first time the NBA will be hosting events in that country…We got our team together and discussed the possibility of hosting a basketball camp in Cuba. … Everyone was excited about the possibility of going down there and trying to do something… While we’re in Cuba, we’re going to teach the values of our game, things like teamwork, respect, dedication… our game is an inclusive, easy-to-understand sport that has brought people together. We think this is a great opportunity to bridge cultures through basketball.”

If the first day of activities is anything to go by, the camp is already having an effect on local players. Reporting from Havana, NBA.com spoke with players at the camp and there was a general sense of awe being in the same room as so many great NBA players. “I’d like to get to the top level of my sport and that’s the NBAâ€, said Felipe Chavez, a 16 year old local player. “It’s a great opportunity to develop, to work on technique and the mental aspect of the gameâ€ he continued.

According to the press release, through NBA Cares, the league’s global social responsibility program, the NBA and FIBA will refurbish three basketball courts and host youth basketball clinics at two Havana locations, and hold clinics for coaches and referees. Also, along with one coach, two Cuban players will be invited to participate in the NBA’s Basketball Without Borders in the Dominican Republic later this year.