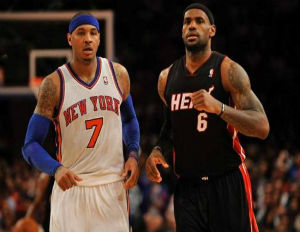 The 6-foot-9-inch professional basketball player plays for the Oklahoma City Thunder. He has won an MVP award, an Olympic gold medal, and four NBA scoring titles. Durant helped lead the Thunder to the Finals in 2012, where they lost to the Miami Heat in the fifth game of the series. The superstar has also won NBA Rookie of the Year Award and was selected to five All-NBA and five All-Star teams. Durant also has an astonishing wingspan of 7 feet 4 inches, which largely contributes to his stellar defensive skills.