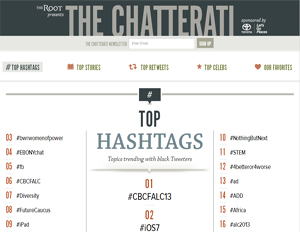 Whether or not you approve of the name “Black Twitter,â€ it’s indisputable that Black Twitter users are a force to be reckoned with on the popular microblogging site. Since the early days of Twitter, which launched in 2006, the Black Twitter population has led many of the conversations taking place on the platform–and it only takes a quick glance at the Trending Topics portion of the site to see that influence in action.

Who can forget how Juror B37’s book deal was scrapped after Genie Lauren, known on Twitter as @MoreAndAgain, circulated a Change.org petition, or when celebrity chef Paula Deen caused a firestorm online after using the N-word , which caused the former Food Network star to lose an estimated $12.5 million in earnings? This group of users is also not afraid to call it like they see it, for example, when Fast Company released a list of the smartest women on Twitter but failed to include an African-American woman, the Black Twitterverse was on it. From hilarious, tongue-in-cheek hashtags such as #BlackBuzzFeed and #PaulasBestDishes to the solidarity shown for slain Florida teen Trayvon Martin, Black Twitter has mobilized and shown their 140 characters or less will be taken into account.

Although slow to adapt, initially, Black press has leveraged the use of social media to not only socialize content and extend their respective brands into the social space, but to spark conversations around hot topics relevant to the African-American community. Â One outlet has taken the online discussions to the next level.

In May, The Root unveiled The Chatterati, a proprietary tool that relies on algorithms and a select group of influential Twitter users, such as Black academics, celebrities and techies, to curate the top hashtags, popular stories and retweets. Sponsored by Toyota Avalon, The Root alongside product design and development studio Cainkade created an apparatus that tracks the social engagement of African-American Twitter users with over 1,000 followers. That data then presents the news and culture site with the inside scoop to stay on top of breaking news and trends, as well as serves as a resource for outside organizations looking to track conversations happening amongst this niche audience.

“It’s basically like a new twist on what we call the word on the street,â€ says Donna Byrd, publisher at The Root, to BlackEnterprise.com. “We were aware of the fact that Blacks over index on Twitter and, as you know, there’s been quite a bit of coverage about Black Twitter over the last year. We created The Chatterati tool to give our readers a real-time view of what was happening in the Black Twitter space.â€

Like Black Twitter, Byrd ensures The Chatterati will continue to grow and evolve as time goes on. Â “We continue to work with our internal team, as well as an external team, to ensure that we’re providing the information that people want to see and that the algorithms are running properly.â€

To check out The Chatterati and The Grapvine, the social media news blog powered by writer and humorist Tracy Clayton, visit The Root.

My Boss Moves Are Better Than Yours: 5 Things Influential People Do Best