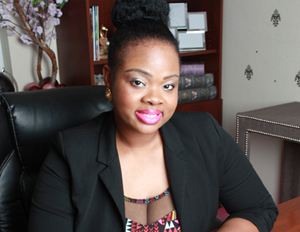 Rochelle Graham, also known as BlackOnyx77, is a popular YouTube personality who began her vlogging journey in 2008. She was one of the first natural hair vloggers at a time when many resources weren’t available to share her natural hair journey. Graham used YouTube as a platform to share her experiences and started recording videos in the bathroom out of her apartment. After uploading the first couple of videos, she realized she was helping people, and it inspired her to continue.

Today, Graham has 92,000-plus YouTube subscribers and more than 12 million video views. She travels worldwide to share her natural hair journey and to represent her product line, Alikay Naturals. By the time Graham was 26, she was named “black beauty pioneerâ€ by Essence magazine and has contributed and been featured in many nationally recognized publications. In addition to sharing her knowledge with YouTube fans across the globe, Graham launched Be Fabulous Salon in Cape Cora, Florida. Graham is an inspiration to women who want to embrace their natural beauty. She has used her influence to encourage and inspire women worldwide.

On how she started Alikay Naturals:

At the start of her natural hair journey, Graham damaged her hair with harsh products and coloring. She had to cut her damaged hair and begin the search for healthy, natural hair products. During her search, she discovered that most of the products on the market contained harsh chemicals. Graham decided to make her own products to achieve her healthy hair goals. She created products that had the best moisturizing, natural ingredients inspired by her Jamaican roots. Initially, she created products for herself, but Graham’s followers noticed that her hair was healthy and was growing; they too struggled with finding the right products and wanted to try the products she used in her videos. She began by making only a few batches, and the demand grew.

While in college, Rochelle and her husband started Alikay Naturals with $100 they saved from working minimum wage part-time jobs. She poured all of the revenues generated back into the business. To date, they have no loans or debt. Her family is her foundation; she, her husband, and even grandparents are all working together to continue to build the company.

“You have to sacrifice. It may mean you can’t dress cute, you may not be able to go out with friends, you may not have the best of the best, but those are material things. Sacrifice, for what your end goal is,â€ she says.

Apple Has a Secret iPhone Store