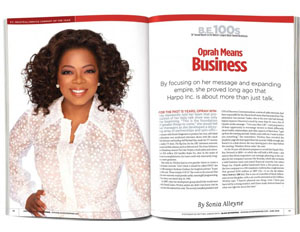 For the past few weeks we’ve been presenting a web series on the truly monumental and significant achievements by black business leaders and entrepreneurs. The “45 Great Moments in Black Business” is a countdown of these achievements with images and video pulled from the rich archives of BLACK ENTERPRISE magazine.

Each milestone event among the nation’s largest black-owned businesses has had widespread impact on black economic development and American industry across decades. This is all in tribute to the 45th anniversary of BLACK ENTERPRISE‘s iconic BE 100s yearly list of the largest black-owned companies.

The latest, great moments featured include:

The sale of Essence may not be considered one of the greatest achievements in black history but the moment represents one of the most vital. It’s central to the debate that continues today: Should African American entrepreneurs retain ownership to build multigenerational black-owned institutions or unlock value in companies by selling them, in many cases, to majority-owned acquirers? Over the years, a number of BE 100 CEOs have wrestled with that question, feeling additional heat from loyal consumers about whether they would be selling out or selling up. (dev.blackenterprise.com/business/great-moments-in-black-business-no-36-essence-sale-continues-debate-over-black-ownership/)

In 2012, ground is broken for the Smithsonian National Museum of African American History & Culture. Among the driving forces are some of the most prominent CEOs among the BE 100s. Here are the black business leaders who helped make the museum a reality. (dev.blackenterprise.com/small-business/45-great-moments-in-black-business-no-35-the-be-100s-help-build-a-540-million-museum-of-black-achievement/)

When BLACK ENTERPRISE covered Peebles in June 2004, he was dubbed “The Prince of South Beach”—and for good reason. He had control of the 417-unit Royal Palm Crowne Plaza Resort in Miami Beach—the first black-owned luxury resort in the nation—and his company, Peebles Atlantic Development Corp. had amassed a $500 million real estate portfolio and demonstrated a pile-driving 141% revenue growth in a year due, in part, to its focus on “on the red-hot South Florida luxury real estate scene.” (dev.blackenterprise.com/small-business/45-great-moments-in-black-business-no-34-donahue-peebles-historic-real-estate-deal-turned-into-a-127-million-payday/)

Be sure to catch the continuing countdown of the greatest moments in black business history next week and beyond.