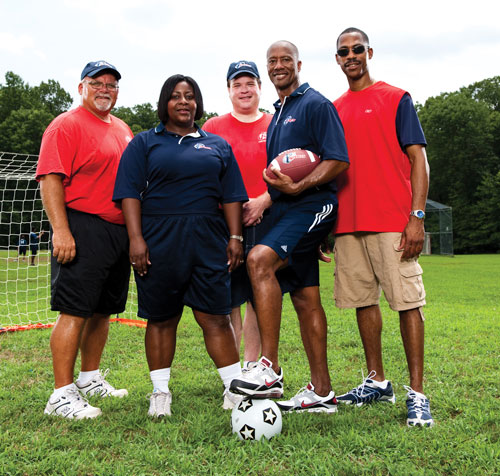 When Donald King retired from the Army in 2002, he looked at starting his own business. With the skills he learned from 20 years in the military, this University of Maryland graduate believed he was ready for the challenges of entrepreneurship.

But there was a wrinkle. As a husband and father with a second baby on the way, the Lorton, Virginia, resident realized there wasn’t time to start a venture from the ground up. And as a sergeant first class, he was accustomed to both giving and following orders. So he looked at franchises. “I was looking through the magazines, and I came across i9 Sports and what intrigued me about i9 Sports was that someone took a business model and applied it to amateur sports,â€ he recalls. Tampa, Florida-based i9 Sports Corp. provides fee-based youth sports leagues, camps, and programs throughout the U.S. “When I was growing up, most of that was always free and I was just amazed that people would pay for their child to play sports,â€ says King, 46.

So he sold the idea to his wife, Gwendolyn, and took out a $25,000 loan to acquire a franchise in 2006. King’s programs serve children ages 4 to 14 throughout southwest Fairfax County, Virginia. He says the area has treated the business well since residents have disposable incomes and most children there don’t participate in school sports programs until their freshman year in high school. More than 430 youths registered for the spring and fall programs, which include flag football, soccer, basketball, and cheerleading. The franchise now has seven contractual employees who serve as coordinators and officials.

Employed as a communication engineer with Northrop Grumman (Gwendolyn, 45, a retired Army lieutenant colonel who served in the first Gulf War, is employed by the U.S. government as a cyberspace planner), King runs the franchise as a side business and pulled in $106,000 in revenues last year. This year, he expects to generate more than $127,000 in revenues. The Kings’ daughter, Taylor, 11, and son, David, 5, both participate in the programs. “We’re having fun right now and I think we’ll be in it for a while,â€ says Gwendolyn. “It’s so amazing to see the 4- and 5-year-olds play and the parents cheering. Of course, Donald is making money but we’re more about making sure they have fun and stay active and healthy.â€
Franchising has long been an integral part of the U.S. economy. In the 2010 Franchise Business Economic Outlook, PricewaterhouseCoopers projects 901,093 franchised businesses to contribute to about 9.5 million jobs for $868 billion in economic output. But with so many kinds of businesses to choose from, where are the best opportunities? black enterprise partnered with the International Franchise Association (IFA; www.franchise.org), a Washington, D.C.-based industry trade organization, to determine the 40 best franchises for African Americans. We developed our roster to provide you with entrepreneurial options as the economy slowly recovers.

Feeling the Heat
According to the IFA, the franchising growth areas are automotive services, tax services, educational services, healthcare, and quick-service restaurants. The 2010 Franchise Business Economic Outlook sees output from franchised automotive services growing 2.2% versus the prior year, quick-service restaurants gaining 3.2%, business services (which includes tax preparation) gaining 2.6%, and personal services (such as education and healthcare services) to gain 4.4%.

Specific data wasn’t available for two areas represented on our top franchise list. The IFA, which released the forecast, does not have numbers for child-related services (such as education and extracurricular activities), but it expects demand to propel continued growth.Â  Disaster restoration is also not addressed directly in the franchise report, but the residential and commercial services sector’s output is expected to increase 1.5%.

While those numbers aren’t stellar, in this environment, such growth is positive. “Growth is happening in the franchise industry, and we fully expect that to increase as credit access improves and the economy slowly rebounds,â€ says Stephen J. Caldeira, president and CEO of the IFA.
But doing business in the sector du jour isn’t enough. The franchisor has to have an understanding of America’s ethnic markets. “Some franchisors are doing a lot better job of being friendly to having a diverse base of franchisees than others,â€ says Andrew J. Sherman, a corporate and transactional lawyer, business and law school adjunct professor, and author of Franchising & Licensing: Two Powerful Ways to Grow Your Business in Any Economy (AMACOM; $45). “Prospective minority franchisees should feel like franchisors are embracing principles of diversity for the right reasons.â€

Then there’s always the financing challenge–one that’s exacerbated on the heels of the credit crunch. “Now when you try to obtain a loan the criteria is going to be much more stringent than before,â€ says Miriam L. Brewer, director of education and diversity at the IFA. “You definitely have to come prepared. Most people are looking to see if you have 30% to 40% of the capital to match what you’re trying to get from the bank, so you’re going to have to be even more strategic in planning and deciding which franchise is the right one for you. We’re trying to prepare people so that before they go to a banker, they have their money in hand and/or a plan in action to get the money. The days of getting 100% financing are gone.â€

A Fine-tuned franchise
“It wasn’t as painful as I thought it would be,â€ Edward C. Todd says about the process of purchasing his franchise. The San Antonio native worked at the Meineke in Universal City, Texas, for about five years before purchasing it from the prior owner in 2008 for $100,000, which he secured through a local microlending organization.

Under Todd’s leadership, the 5,000-square-foot franchise became 40% more profitable than it had been. In 2009, revenues for the four-person operation totaled $660,000, and this year Todd is anticipating an increase of about 10%. The 49-year-old credits the ability to exceed profitability goals to numerous things. “Being dedicated is No. 1. Some people get into the business as more of an investment,â€ says Todd. “I’m willing to give you honest service as well as try to educate you in the process. Educating the customer about their own vehicle is important.â€ And that focus seems to have helped because an estimated 40% of Todd’s customers are repeat business.

An uncertain economy has led to auto owners hanging on to their old rides for longer periods of time. They’re also avoiding the dealerships for maintenance and repairs since they tend to charge higher rates, according to Brewer. And some dealerships closed. This is good news for Todd, who says with his wife Pamela’s support he’ll build and open a larger Meineke franchise by 2011.

To execute and help finance his plan, he’ll sell the existing franchise. He thinks the Meineke brand offers substantial room to grow compared to others, so he’s betting the business will run smoothly for a long time. “As long as you have automobiles, you pretty much have a job,â€ says Todd, whose worked in the industry since 1982. “The only thing that’s not going to make you successful is poor workmanship or poor customer service. I see a lot of franchisees that expect a lot more from the corporation than they actually give. Make sure you do your homework and that the franchise purchase is something you want to do. You’re going to have to work and roll your sleeves up no matter what.â€

Franchising has worked well for the Kings and Todd but, as with any venture, preparation is a must. “Next to buying a house or getting married, purchasing a franchise would be the next biggest financial decision a person would ever make,â€ asserts Brewer. “You have to go with what you have a passion for or experience in, but you also have to do your homework and ask questions.â€ Brewer recommends finding someone you trust who can help you if you don’t know what questions to ask. And be willing to take your time, do the proper due diligence, educate yourself, and put things in place financially before you sign the dotted line.

These franchisors were sent be’s proprietary franchise survey in which they provided further clarity regarding costs and sales potential of franchises. The surveys also requested diversity and inclusion efforts made by the franchisors. Supporting materials such as Franchise Disclosure Documents (previously known as the Universal Franchise Offering Circular) were requested. black enterprise editors rated the franchises according to affordability, revenue potential, effectiveness of diversity programs, and marketing/advertising support.

10 Things to Ask Before Buying a Franchise

Like any investment, buying a franchise requires a significant amount of due diligence. Andrew J. Sherman, a corporate and transactional lawyer, business and law school adjunct professor, and author of Franchising & Licensing: Two Powerful Ways to Grow Your Business in Any Economy (AMACOM; $45) recommends asking the following questions before cutting a check:

1.Â  What is the background, team, and track record of the franchisor?
Visit the franchisor’s website; use Internet search engines as well as social media to see what’s been said about them.

2. What are the key trends within the franchisor’s industry? “You have to look at what macro or micro trends are out there that might affect the business over the next five, 10, or 15 years,â€ says Sherman.

3. What is the competition in the local market, and who represents the target demographics? If the franchise targets a niche market, such as daycare or certain ethnic foods, be sure that the area’s population has that audience.

4. What are the total projected costs to get the franchised business open to the public? Though it seems obvious, Sherman points out that some forget to factor in personal expenses.

5. What is the franchisor’s relationship with its current franchisees, and has there been any history of litigation? Things such as relationships won’t show up in a Franchise Disclosure Document, and it doesn’t hurt to visit a franchisee and ask a few questions.

6. What is the business model and profitability of the franchised business? Speak with existing franchisees about what works for them. “It’s very important to do your own budget, projections, and pro forma,â€ Sherman recommends. “Don’t just take the numbers given by the franchisor at face value.â€

7. What is the size of and degree of protection of the assigned territory? The franchisor is required to tell you if the territory is protected and its size and how many other franchisees the franchisor can appoint in your market.

8. Are there any requirements to purchase any goods or services directly from the franchisor, its affiliates, and designated vendors? In the case of eateries, food components will just about always be purchased from the franchisor, but the franchisee may be able to buy things such as cleaning goods and toilet paper elsewhere at a discount.

9. What’s the company culture like? Sherman suggests asking other franchisees in the system whether the parent company’s management consistently interacts with them as well as the IFA.

10. What is the strength and market recognition of the franchisor’s brand and strength of its intellectual property? You want to determine whether you can build off their brand or will struggle to introduce it to your market.

The Meaning of Life Insurance