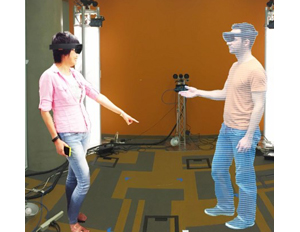 “Help me, Obi-Wan…â€ Princess Leia pleads in a three-dimensional holographic message delivered by R2-D2 in Episode IV of Star Wars.

You too may soon send a hologram message of yourself to someone.

Microsoft Research’s new software, called holoportation, is a 3-D capture technology that allows high-quality 3-D models of people to be reconstructed, compressed, and transmitted anywhere in the world in real time. When combined with mixed reality displays such as the Microsoft HoloLens, this technology allows users to see, hear, and interact with remote participants in 3-D as if they are actually present in the same physical space as you.

The HoloLens, Microsoft’s virtual reality headset, is slated to ship to developers this week.Â  Microsoft describes it as “the first fully untethered, holographic computer, enabling you to interact with high-definition holograms in your world.â€

According to Microsoft,Â the HoloLens goes beyond other virtual reality headsets that have recently appeared on the market. It offers a “mixed realityâ€ experience–a combination of enhanced virtual reality and augmented reality.

Shahram Izadi, partner research manager, explains, “To make all this happen, we’ve had to create a new type of 3-D capture technology. I’m surrounded by these 3-D cameras that we’ve developed on our team. Each of them is capturing me from a separate viewpoint, and we’re fusing this data together to create a temporally consistent model.”

The camera filming him has a HoloLens tracking model attached, whichÂ allows taking these 3-D models and compositing them in real time into the real world.

Another user also wearing a HoloLens can interact with the 3-D image in their space.

“Imagine connecting with family members who are thousands of miles away,â€ says Izadi in the official video below.Â  At 2:04 he demonstrates his daughter holoporting. It’s amazing, take a look:

‘O.J. Is Innocent’ Controversial Docuseries Set To Be Produced by Martin Sheen

How Much Can You â€˜Reallyâ€™ Afford to Spend on a Home?