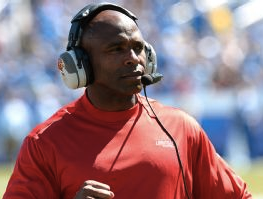 The University of Texas named Strong head coach of the football program, ending a nationwide search which brings Strong, 53, to one of the nation’s premiere jobs. He replaces Mack Brown, who coached the team for 16 seasons.

“Our committee and former lettermen helped create an extensive selection criteria and after visiting with Charlie, it was clear he met them all,” Texas athletic director Steve Patterson said in a statement released Sunday. “He led championship defenses as an assistant, a resurgence at the University of Louisville with double-digit game winning seasons, and twice has been selected conference coach of the year.”

The Associated Press reports that Strong arrived in Austin on Sunday and will be introduced at a press conference tomorrow morning.

“To follow a future Hall of Fame coach like Mack Brown, who built a program that had great success and a reputation of doing it with class and integrity, is extra special,” Strong said in the university-released statement. “The National Championship, BCS Bowl wins and all he accomplished in 16 years built on the Longhorn legacy makes it such an exciting place to be.”

Strong was named Big East Coach of the Year in 2010.

“This was a difficult decision because the University of Louisville gave me my first opportunity as a head coach,” Strong said. “I have so much respect for President [James] Ramsey and [athletic director] Tom Jurich. They have been great to me and my family, and it was very hard to say goodbye, but they know this was an opportunity I couldn’t pass up.”

First-Quarter Presentations: How to be a Hit

Largest Franchise Expo in the South Relocates to Houston