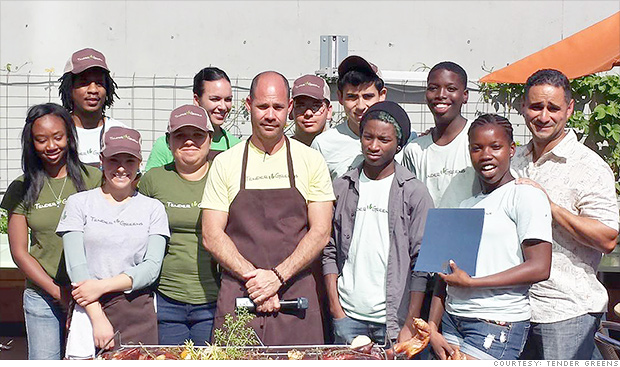 Erik Oberholtzer, CEO and co-founder of California restaurant chain Tender Greens, had been trying for years to figure out how to help young people. Last year, Oberholtzer’s company started a charitable program dubbed the “Sustainable Life Project.” The three-month program targets young people ages 18 to 24 who are transitioning out of foster care, who may be at-risk of becoming homeless or ending up in prison, reports CNN.

The Sustainable Life Project partners with local organizations to recruit young adults transitioning out of the foster care system to participate in a 12-week culinary arts and agriculture internship program. Youth transitioning out of foster care face unique challenges that make them especially vulnerable. Distrust, abuse, neglect and general lack of access to resources and guidance often make navigating adulthood difficult, according to the Tender Greens website. Without primary needs like housing, vocational training and legal support, these youth frequently don’t have the luxury of dreaming beyond finding a home and employment.

The young people visit artisan food makers, urban farmers and food-processing facilities to learn about the sources of their food. They get culinary arts training from restaurant chefs, and they receive a paid internship inside one of the company’s 12 restaurants. The restaurant chain then conducts interviews and takes up to eight students every three months.

Some 15 youths have graduated from the Sustainable Life Project since it started, and 10 who have landed restaurant jobs, CNN reports. Tender Greens pays students an hourly wage for their internship and covers transportation costs for farm visits. Oberholtzer started the program at a time when many CEOs were focused on surviving the recession. But Tender Greens was in the midst of a rapid expansion. The company grew from $7.3 million and 115 employees in 2009 to $28 million in revenues and 450 employees in 2013.

The former director of food and beverage operations for the Four Seasons and two fine dining executive chefs, Oberholzer and business partner Matt Lyman, had each spent some 15 years in some of the most prestigious kitchens. But it was while working at the luxury beachfront resort Shutters on the Beach in Santa Monica, the then thirty-somethings decided it was finally time to take a risk. So they launched Tender Greens, a farm-to-table restaurant chain concept.

Despite the challenges of fast growth, Oberholtzer felt compelled to do more to help struggling youths after volunteering to cook for the homeless on Los Angeles’ West side. “You can either complain or do something,” he told CNN.

Getting the program started was daunting. Oberholtzer decided to put it under the umbrella of Tender Greens instead of establishing a separate non-profit. It’s allowed them to be more flexible with the program.

Sustainable Life Project takes no donations and instead relies on company revenue, donated food and the time of Tender Green’s staff. The HR and finance executives handle administration and chefs teach culinary and job skills. Those involved in the program spend between two and four hours a week on it.

Tips on Overcoming and Surviving a Financial Crisis