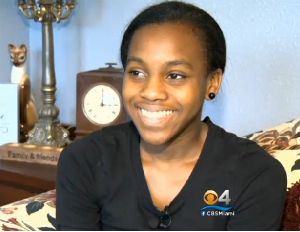 It’s that time of year where high school and college students alike are celebrating their academic accomplishments and preparing themselves for the next big challenge in life. But unlike most kids who celebrate their high school and college graduations years apart, Florida teen Grace Bush is celebrating both academic achievements in the same week.

“I started when I was 13 at Broward College and I also took my classes throughout the summer, so I was able to finish it before four years,” Grace tells CBS Miami.

Now with a bachelor’s degree under her belt and a high school diploma on the way, Grace, who finished college with a 3.8 grade point average, plans to pursue a master’s degree this fall and then attend law school.

“I would eventually like to become chief justice of the United States,” says the high achieving scholar on her future career goals.