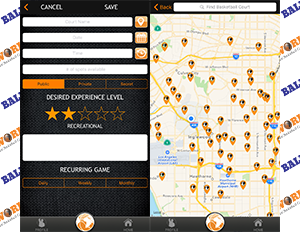 Harvard, Stanford, and other top schools tend to get all the “street cred” for launching some of the most groundbreaking tech ideas and startups. Â If you remember, there was once a little social networking startup that launched out of a Harvard dorm room. Now, Facebook has $49 billion in assets alone. However, this article isn’t about a startup with the same aforementioned pedigree. Instead, I wish to share the journey of two military veterans, who developed a much needed app that enables pickup basketball players to simply organize players and locations for games worldwide using GPS positioning.

Navy veterans, Kyle Cox and Nicholas Damuth, wanted to leverage the knowledge theyÂ  acquired while in the armed services, pivoting this insight into something that complimented the proud symbols of the Navy, Army, Air Force and Marines. “There’s a dearth of military veterans among the ranks of the country’s top startups. My co-founder and I desired to demonstrate, even after service in the military, there are still ways you can make a positive change in the community through tech,” Cox says.

Cox and Damuth, who served together from 2012 to 2015, came together in 2014 to forge a new path built on the synergy of tech. Their first brainchild is a remarkable new app called Ballerz World. Cox, who spent six years in the Navy, readily admitted that he lacked a background in technology before entering the military. His expertise was in sports marketing and athletic representation. As a University of Michigan student, Cox interned with some of the biggest sports agents in basketball. Those internships later led to work with clients like Yao Ming, Carmelo Anthony, Jason Kidd, Paul Pierce, and Steve Nash. However, Cox noticed the stunning surge of digital content that was beginning to saturate the planet at the time, and ultimately determined that technology was where he needed to stake his claim in the business arena. After weighing his options, he joined the Navy and threw himself into the world of technology, mastering the complexities of satellite communications and electronics.

Unlike many programmers who access the world of coding through mathematics, Damuth, an 11-year Navy man, credits his love of art and experience as an artist for first piquing his interest in coding.

After discovering the capabilities of Adobe’s Photoshop, Damuth realized that one could actually use computers to create art.Â

For both men, the desire to pursue their passions–basketball and art–led them to technology and entrepreneurialism; Cox’s love of basketball keeps his mind churning about ways to improve gaming experiences for street ballers, while Damuth’s passion for art helps to inform his coding.

The military is full of talented, fearless, tenacious, and imaginative individuals, who are ready and willing to use their passions as the driving inspiration to achieve entrepreneurial success. They have relevant training and great ideas, which makes them the next pedigree of #techieVeterans looking to change the world, one line of code at a time.

The Simplest Ways Business Owners Can Learn to Code