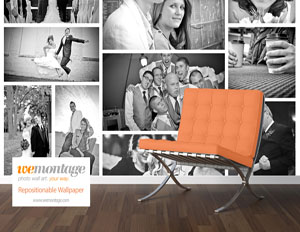 HGTV has taken even the most non-outdoorsy, home-improvement types and turned them into aspiring designers. Whether it’s small DIY projects or large landscaping ventures, the cable network has outfitted its viewers with the tools to try their hand at nearly any project they desire. While watching one of the network’s shows, James Oliver, Jr. was inspired to create software that allows users to design removable wallpaper with their photos.

“My wife was watching an episode of ‘Home by Novogratz’ on HGTV. They were in his [Robert Novogratz] family’s basement covering this wall with these really big black and white collages, and, of course, they make it sound like it’s so easy,â€ says Oliver. “I stayed up all night long to figure out how they did that and there was no easy way to do it. I wanted to create something like that for my own home and my own photos, so I got the idea to create WeMontage.â€

Oliver invested $40,000 of his own money to launch WeMontage in 2011. Nearly a year later, the Morehouse graduate was strapped for cash, working a seasonal job at Banana Republic for additional support. Â However, the savvy entrepreneur was determined to resuscitate WeMontage, landing a spot in front of a crowd of investors at a pitch contest a few short months later which led Oliver’s startup to become enrolled in gener8tor, a Wisconsin-based, 12-week accelerator program that provides startups with capital, office space and mentorship, among other resources. WeMontage has risen above its hardships to secure a sizable amount of funding and a team, which now includes his technical co-founder, Chris Schmitz. Not to mention, Oliver will have a story of passion and perseverance to share with his bundles of joy, which were born the day before his departure for gener8tor. The New York native caught up with BlackEnterprise.com to talk about WeMontage, the rocky road of entrepreneurship and how persistence led to newfound opportunities.