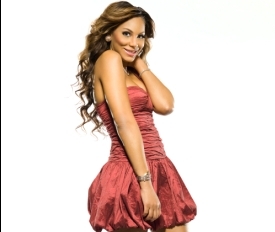 YouAlreadyKnow.com that Tamar Braxton, the youngest of The Braxtons musical clan, speaks her mind unapologetically. Ever since Toni Braxton invited America to bear witness to her intimate family life with the hit WE tv show Braxton Family Values, Tamar–reality TV’s latest breakout drama queen–has become a guilty pleasure for avid viewers, and has endeared everyone with the witty delivery of her infamously hilarious dot-com catch phrases. From her candidness about plastic surgery to her annoyance with some of the actions of her sisters, Tamar holds back little.
Blackenterprise.com caught up with the feisty little sister who explained why her marriage is nothing but the real thing, why those who thinks she’s jealous of Toni have it all wrong, and her best advice on how to KeeptheIRSoffYourBack.com.
Starring on a reality show heightens anyone’s exposure. Are you ready to be in the music spotlight?
(Laughs) That’s not even the question… I am 100% ready! What the show has done, unfortunately, is made everyone believe that Tamar on TV is all that I am. They think there’s no difference and that there aren’t other sides to me.
So can we expect you to fly solo in the reality TV world?
I can’t predict the future, but right now I’m enjoying the time that me and my sisters are spending relearning each other as adults. I had to learn I can’t be popping off at no grown women (laughs). Although we grew up together, the reality is that each of us is into different things–some of us have families, careers–and we have to respect everyone’s decisions, even if you know it might not be the right move for them, you simply have to respect it.
You’ve been candid about feeling like you’re living in Toni ‘s shadow and some perceive that as jealousy. What do you say to those critics?
This whole jealousy thing is ridiculous! Toni works really, really hard. I’m proud of her, not jealous of her. I don’t even want to be the same kind of artist. I care about my sisters and I’m so passionate about everything–especially them–so when people see me going off, it’s just my emotions. I want to see them win and be happy. Sometimes I feel like I want to learn from them rather than them learning things from me all the time. I know a lot of things I say are things my sisters don’t want to hear from their youngest sibling, but I say them.
What adversities have you faced in your own musical pursuits and how have you combated them?
My biggest challenge [in the music biz] has been that everybody expects me to sound like Toni Braxton. I’m like, “she’s not here, and if you want Toni, then you’ll have to call her.” [That expectation] was a lot to get over and I had to pound it into folks’ heads that that’s not who I am. I wasn’t changing [for anyone]. I don’t want to sing R&B. I love rap, house–music of today that’s really poppin’!
Public perception is that you are in a loveless marriage and that you are only with your producer husband, Vince, for personal gain. What do you say to those naysayers?
Absolutely ridiculous! I find it highly offensive because me and my husband dated each other for seven years, but we’ve only been married for [a little more than] two years. I mean, who’s gonna be with someone just ’cause they got some money and be miserable? I ain’t doing that! If I didn’t love my husband for who he is, then why do I want to work and have my own career? That doesn’t even make any sense. Me and Vince are regular. Some days we cool, some days we want to pull each other’s hair out, but that’s real life because [two people] are not going to agree on everything. It also depends on what your definition of love is, it’s different things for different people. Some people think hugging and kissing someone in public all the time is love, but when Vince told me [thatsthetruth.com], it was out of love because he didn’t want me looking crazy, throwing temper tantrums without understanding that there’s an order to things in this business.
Vince is a highly paid and sought after music producer and works with people megastars like Lady Gaga. What are some dos and don’ts of the music business that you’ve learned from him and from working with your sister Toni throughout the years?
The biggest lesson is to be your own business woman. Look over your own paperwork. Tell your lawyer, “I’m going to need to see those documents and need you to explain this to me line-by-line, paragraph-by-paragraph.â€ The other thing that I’ve learned from Lady Gaga is that just because you’re a woman doesn’t mean you have to sell yourself short. Don’t date people you work with [out of convenience]. I’ll admit I used to do that back in the day because I didn’t meet anyone [outside of the industry]. Now I met my husband while we were both in the industry, but I met him through my sister. It wasn’t like we were working together and started dating. As far as advice about working with family, the only dos are to take time apart and take time to separate things. What is for me is for me, what’s for Trina is for Trina and we each have to respect that.
Continue reading on page 2

Black Blogger Month: The Frugalista, Blogging on a Budget

Braxton Family Values: Highlights of Love and Money Among Sisters