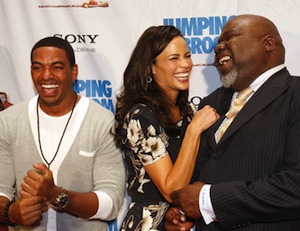 One of my favorite movies is My Big Fat Greek Wedding, a 2002 romantic comedy about what happens when a nice middle class Greek girl falls in love with an upper middle class, White anglo saxon protestant (WASP) guy and they decide to get married. Cultures clash. Hilarity ensues. Deep human truths are revealed. And, of course, love triumphs. This kind of film is common, though not always well done. But when it’s done right, it’s magic–the kind that makes you watch My Big Fat Greek Wedding over and over again on cable. Okay, maybe not you. But I just love that stuff (Love & Basketball, Working Girl, Sabrina, Pretty Woman–don’t get me started).

But here’s the thing. I’m not Greek. And I’m not a WASP either. So that’s why I’m not satisfied with just Black people going out to see Jumping The Broom, which had a great opening weekend week before last, delivering more than $15 million at the box office (it cost $7 million to make). This weekend, I went out of my way to get my non-Black friends to go see the film–and you should, too. Just as Barack Obama could not have become the first Black president of the United States if only Black people had voted for him, the future of Black film making will hinge on whether we can change the assumption that films with predominantly Black casts should only be marketed to and seen by Black people. Jumping The Broom deserves to be enjoyed by White and other non-Black moviegoers, just the way My Big Fat Greek Wedding was enjoyed by plenty of non-Greek (not to mention non-WASP) moviegoers.

To the surprise of Hollywood pundits, Jumping The Broom opened as the No. 3 movie in America, and definitely the No. 1 romantic comedy (coming behind Thor and Fast Five–not exactly date flicks–and ahead of Something Borrowed, another wedding comedy). Starring a great (and excellently utilized) cast led by Angela Bassett, Loretta Devine, Laz Alonzo and Paula Patton, the movie tells the story of what happens when a nice upper class girl falls in love with a successful guy raised by a working-class, now widowed, mom, and they decide to get married–before introducing one another to their respective families. (Cultures clash. Hilarity ensues. You know where this is going. Hollywood is nothing if not formulaic.)

With all due respect to Tyler Perry, this is nothing close to a “Madea” movie. TD Jakes Enterprises, headed by Bishop T.D. Jakes, teamed up with Sony Pictures Entertainment and Tracey Edmonds‘ Our Stories Films, to produce Jumping The Broom. However, although Bishop Jakes, senior pastor of Dallas’ The Potter’s House megachurch, and Perry have perhaps done more than any duo to usher Christian entertainment into the mainstream of stage and film (going back to Perry’s stage musical adaptation of Jakes’ book Woman Thou Art Loosed), the Christian faith of some (not all or even most) of the characters in Jumping The Broom permeates the context, but is not the driving force, of the story. The themes of faith and redemption are omnipresent, but not pronounced; nothing on the order of the rocking emotional church scenes and “hallelujers!” associated with Perry’s films. Similarly, the fact that the cast is predominantly Black is just the starting point of defining the characters and telling their stories, not the totality of who they are and how they interact with the world.

The point of all this is not to say that Jumping The Broom is better than say, Madea’s Family Reunion. But the truth is, the appeal of the films Perry is best known for is pretty much limited to Black moviegoers, especially those who identify with the Black church. Not so with Jumping The Broom, which has appeal and entertainment value far beyond being Black or a person of faith. Which is why we need the latter film to live up to its potential with non-Black audiences, as well as Black moviegoers.

Here’s the deal. Hollywood’s pipeline for producing and distributing Black films has narrowed incredibly over the past several years. In fact, only a handful of major film studios remain committed to distributing films targeting Black audiences, including Lionsgate (primarily via its partnership with Tyler Perry Studios) and Sony Entertainment Pictures. In other words, at a time with more Black filmmakers producing more films about Black people than ever before, the window of opportunity to get those films to movie theaters has narrowed to a crack.

We needed the presidential runs of Rev. Jesse Jackson (and before him, Rep. Shirley Chisholm) to make President Barack Obama possible. But if Obama’s appeal was limited to Black voters, he’d be the Democratic Party’s version of Sarah Palin–writing books, making big bucks on the lecture circuit and keeping his party’s base (i.e. including us Black people, of course) excited and engaged–not overseeing the elimination of Osama bin Laden. Similarly, Jumping The Broom was made possible by films like those made by Tyler Perry, Spike Lee, Robert Townsend and their peers and predecessors, who validated the economic value of Black moviegoers as a consumer market. But if the case is not made that you don’t have to be Black to vote–via the box office–for a movie about Black people, the progress of Black film making will be stalled, perhaps indefinitely.

Unlike Diary of a Mad Black Woman (another movie I can’t get enough of), Jumping The Broom is not a great Black movie. It’s a great movie about Black people. The future of Black film and Black filmmakers hinges on moviegoers of all races and nationalities appreciating this distinction, not just intellectually, but at the box office. If you really want to support Black film, urge your White and other non-Black friends to see Jumping The Broom. Better yet, take them with you.