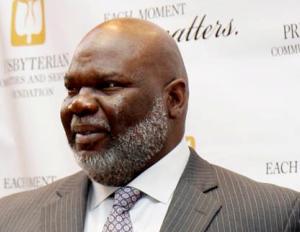 The third week of August marked the kickoff of MegaFest, a four-day inspirational family festival hosted by Bishop T.D. Jakes and held in Dallas. MegaFest brings together four of the Bishop’s most popular events — ManPower, Woman Thou Art Loosed, MegaYouth presents Fire Code, and MegaKidz presents Destiny World. In addition, this year’s MegaFest played hosts to the second International Faith & Family Film Festival and the stage play, Tyler Perry’s Madea on the Run.

MegaFest got its start after years of hosting separate – and extremely popular – Woman Thou Art Loosed and Manpower seminars in various locales. Jakes decided to bundle the two together, adding more entertainment and youth events. He took the whole package to Atlanta in 2004, calling it MegaFest. It has been a huge success ever since. Â On average MegaFest draws crowds of 75,000 or more. Last year’s MegaFest Family Festival generated over $70 million in revenues.

BlackEnterprise.com had a chance to speak with the Bishop about the evolution of MegaFest, as well as why the Black Lives Matter agenda needs to be a national priority for all Americans. Â In addition to his popular event, the Bishop has been able to reach millions through some 41 books he has written, selling more than 20 million copies and producing more than $115 million in revenues. Here, he also opens up about his latest book Destiny.

BlackEnterprise.com: What have you learned from a business standpoint, and how have you been able to adapt MegaFest over the years?

Jakes: What I’ve learned over the years is that social media is a game changer. We have so many more ways to reach people today than we did when we started. The only thing we had back then was TV, radio, and print magazines. But today you have so many ways to directly contact your constituency and they can directly contact you through social media. Being able to now load products online as opposed to always having to have physical products available for sale has changed considerably. We’re now streaming live online; we’re now interfacing between TV, internet, and social media.

What was the significance of having MegaFest return to Dallas this year?

There’s lot of benefits for the city of Dallas. Last year the Dallas Morning News reported that we had 75,000 attendees over the life of conference (held in 2013) and a $41 million impact to the city. It is the third largest event that Dallas hosts a year, and so it’s very significant. I believe the numbers in Atlanta, were around $299 million over three days, and it was a huge impact there as well. So, you know you can’t even quantify the impact from a financial perspective, but beyond that it’s a huge opportunity for the business community here in Dallas. I recently have been appointed to the executive board of the Dallas Regional Chamber of Commerce. I’ve been able to interact with a large constituency in the business community on a CEO level and to be able to convey a deeper understanding of how they can benefit from [MegaFest]. Small businesses are connecting and gaining access to volumes of people that they otherwise would not be able to reach.

4 Back-to-School Apps for Parents and Students