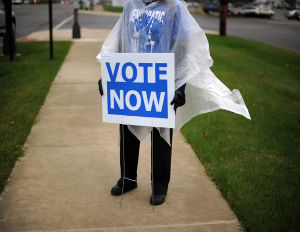 From the LA Times

Early voting is already underway in Ohio, but the Republicans wanted to halt the voting the weekend before the election.

Last year, Republicans, who control the legislatureÂ and governor’s office, voted to reduce the time for early voting and to close the polls on Friday, Nov. 2, saying the down time would allow election officials to prepare for election day on Tuesday, Nov. 6.

The Obama campaign asked the Supreme Court to allow early voting the weekend before the election and their request has been upheld.

Read more at the L.A. Times.

Report: The Richest Person Ever Was a Black Man