Super Bowl XLVII on CBS, By the Numbers 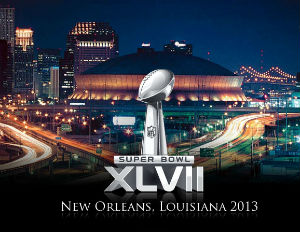 CBS Television Network on Tuesday rolled out its big guns to promote its multi-platform coverage the week leading up to the Super Bowl.

We’ll have coverage on some interesting developments this afternoon, but let’s take a look at some key numbers that makes this year’s broadcast quite lucrative for the network.

*111 million was the record number of viewers who watched Super Bowl XLVI between the Patriots and Giants. CBS wouldn’t give estimates, but industry insiders said this year is expected to surpass last year’s numbers.

*15 shows across CBS’ television networks will be broadcast from Jackson Square in New Orleans.

*43 million women watched the Super Bowl last year. CBS said that it would broadcast “THE TALK” live from New Orleans’ Jackson Square to capitalize on the increasing number of women viewers. It stars comics Aisha Tyler and Sheryl Underwood.

*18 — number of times CBS has broadcasted the Super Bowl.

*5 – number of times it has broadcasted the Super Bowl from New Orleans.

*$4 million is the exorbitant price tag set by CBS chief Leslie Moonves for a 30-second spot during the Super Bowl. As of just a few days ago, CBS reportedly only had two spots remaining.

*1 — is the amount of times Moonves invoked the name Janet Jackson when this reporter asked him and Sean McManus about what they could tell us about the NFL selecting Beyonce to perform the halftime show.

*17 — minutes that Beyonce’s halftime experience is expected to last.

Kiva & Capital One to Give $150k to D.C. Area Small Businesses