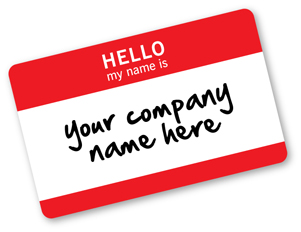 A new study from Clutch shows that young startups tend to have more outlandish and inventive names than businesses that were established years ago.

Big drivers in the trend towards unique company names are domain name acquisition and trademark rights. An interesting takeaway from the study: 75% of the companies founded prior to 2012 had primarily descriptive or experiential names. Only 17% had invented names and a mere 7% had evocative names. In contrast, of the startups founded after 2012, 41% had invented names and 17% had evocative names.

Kristen Pembroke, the director of client services at the branding agency Catchword, spoke on the new trends of naming startups.

“One of the things you see quite a bit of is combined words or two-word names. Examples of this are Wealthfront, ClassDojo, and Blue Apron, or from our own portfolio; names like Upwork, Livescribe, and Keysight. What people like about this style of name is that they’re able to get a couple different messages across. It’s also less likely that there’s going to be a trademark or domain that exists with those exact two words; either put together or used in combination.”

The study also revealed that 76% of the startups have an exact match-dot-com domain name–proving the importance of web presence. However, there has been an increase in alternative TLDs (Top Level Domains). This means more names such as Bit.ly rather than Bit.com. The number of startups with alternative domain name extensions has doubled since 2012.

Millions of People Join ‘Make a Difference Day’ on October 24