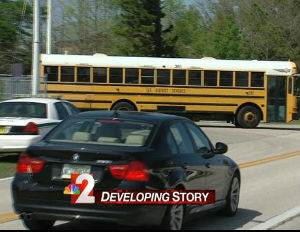 A 16-year-old Florida high school student stood up to one of Cypress Lake High School’s football players as he “aimed a loaded .22 caliber revolver at another student on a school bus,â€ reports NewsOne.com.

The young teen stepped in to wrestle the gun away from the would-be shooter last Tuesday (February 26) only to find himself suspended from his Fort Meyers, Florida high school for “doing the right thing.â€ As the student fears for his safety and still remains anonymous, he told Florida’s Fox4 there was “no doubtâ€ the gunman was going for the kill.

“I think he was really going to shoot him right then and there,â€ said the 16-year-old student.

According to Fox4, “the student said the suspect, a football player, threatened to shoot a teammate because he had been arguing with his friend.” Authorities confirmed to WFTX that the weapon was indeed loaded, and the arrest report stated the suspect, identified by WVZN-TV as Quadryle Davis, was ‘pointing the gun directly’ at the other student and ‘threatening to shoot him.’ That’s when, the teen told the station, he and two others tackled the suspect and wrestled the gun away. The next day, all three were suspended.

“How they going to suspend me for doing the right thing?,â€ asked the unnamed student.

Quadryle Davis has been charged with assault with a deadly weapon without intent to kill, while the anonymous student will be allowed back to school today.