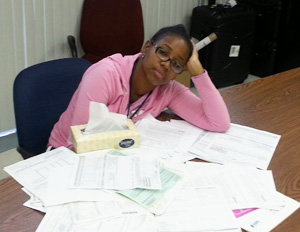 One of the four directives of the Student Aid Bill of Rights President Obama announced this week says every student in America should “Receive quality customer service, reliable information, and fair treatment when repaying loans.â€Â  Â “…we are committed to finding new and better ways to communicate with student loan borrowers and to creating a centralized, easier process for repaying loans,â€ adds the Department of Education.

The President, and others in Washington who have been pushing for this reform must may have had people like Bridget Butler in mind.

In 1994, Butler was able to secure about $20,000 in Federal Stafford Loans at a rate of 8.25%.Â  She used the money to go to nursing school in southern California. This was a return to study for the former University of California (Los Angeles) chemistry major, who left UCLA in 1993 in order to have a child.

Soon after graduating from nursing school, Butler was able to secure a nursing job.Â  “I was religious about paying my monthly student loan bill,â€ Butler says.Â  “In fact, I was so uncomfortable with the debt that I left nursing and took a job at Southwest Airlines so that I could make bigger payments and get rid of the debt faster, ” she adds.

In 2002, Butler returned to UCLA, borrowing another $6,000 from Uncle Sam. At the behest of student loan lending giant Sallie Mae, a few years later, Butler consolidated all of her loans into an affordable $200 monthly payment at a fixed rate of 4.75%.

“It was manageable, it was easy, and it made a lot of sense,â€ Butler says.

When a lending institution exits the student loan business they sell the loans they’re holding to another loan servicer. Analyst say students often don’t know about the transfers until well after the fact. In addition, many say the notification process is inefficient and students can lose valuable information about their loan’s status.

Butler’s loan was sold 4 times. The latest lender recently sent her a statement saying she owed a total of $29,000— about $10,000 more than she believed her remaining balance to be.

“I was shocked. I have always paid my loans on time for years … more than I had to pay in some cases. Now they’re telling me my balance is bigger than all of my original loans put together? It didn’t make any sense,â€ Butler.

Read more about Butler’s story on the next page …